A Homily for Meatfare Sunday: The Love the Lord Seeks on Judgement Day (Fr. George Metallinos) 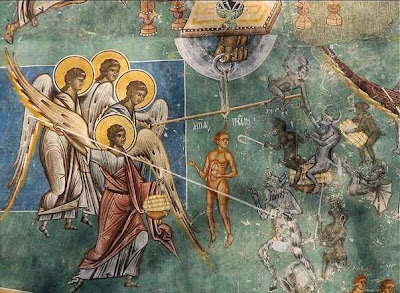 Meatfare Sunday: Love, Yes, But What Kind of Love?
By Protopresbyter Fr. George Metallinos
1. In today's Gospel reading we are reminded of a great truth. Last Sunday, the sacred Gospel spoke to us about the goodness of God the Father, who awaits the return of that which He fashioned. But this should not lead us to forget His justice. God is not only a loving Father, but also a just Judge.
"Neither is His mercy without judgement, nor His judgement without mercy," says Basil the Great. The Gospels tell us that He will judge the world, and not arbitrarily, but according to our works. Today's reading, therefore, brings us before the event of the Judgement. And we say "event" because this global Judgement is for our Faith an eschatological certainty and reality, which is acknowledged by our Creed as part of our ecclesiastical Faith: "And He will come again to judge the living and the dead...."
We are called, therefore, today to realize three things:
First, that our Judge will be Jesus Christ, since He is God. Christ is Savior, but also Judge. If the first time He came to earth humbly "to save the world", now He will come "in His glory" to judge the world. He who became a "curse" for us on the Cross, has every right to judge us if we have allowed Him to dwell within us and in our society without His sacrifice being in operation.
Second, He will judge not only Christians, nor only Gentiles, as the Jews believed the judgement would be. He will judge all people, Christians and non-Christians, faithful and unfaithful.
Third, the basis of the Judgement, the criterion, will be love. That is, our attitude towards our fellow men. Just as the Judgement will be global and universal, so also will be the criteria. It is the universal law of humanity which can be found everywhere, among Christians and non-Christians, those who knew Christ and those who were not able to know Him and were far from His Gospel. With this law, there is no room for excuses and justifications. Hunger, thirst, nakedness, sickness, the cries of prison cannot remain hidden so as to enable someone to justify themselves that they were unnoticed. No one can ignore them without first ceasing to have human feelings, unless they have complete indebtedness and impoverishment of the image of God within them.
2. The shocking splendor and fearsomeness of the hour of Judgement is beautifully depicted in the hymns of the day.

When Thou comest, O God, upon the earth with glory, the whole world will tremble. The river of fire will bring men before Thy judgment seat, the books will be opened and the secrets disclosed. Then deliver me from the unquenchable fire, and count me worthy to stand on Thy right hand, Judge most just.