Verses
To St. Maruthas
Maruthas loved God very very much,
Standing beside God he is glad very very much.
To the Martyrs of Martyropolis
The city of Martyrs is called such,
Because many there were martyred by the sword.
At the time of Constantine the Great, Liyuta, the ruler of Sophene (or Sophia), a territory to the Southwest of Armenia, fell in love with Mariamne, the Christian daughter of the ruler of a neighboring district on the borders of the Roman and Persian Empires. Mariamne was unwilling to marry a pagan but, through the mediation of Saint James of Nisibis (Jan. 13), her parents agreed to the union. Liyuta was baptized that year on Easter following the intervention of an angel, and a large number of his people embraced the Christian faith.
Saint Maruthas was the son of Liyuta and Mariamne, and he became learned in every branch of knowledge, especially medicine. Upon his father's death, he succeeded him as ruler of Sophene and was later consecrated as its Bishop.
In the year 381 Saint Maruthas participated in the Second Ecumenical Synod at Constantinople, convened against the heresy of Macedonius. In 383, he attended the Synod of Antioch against the Messalians.
On the accession of Yazdegerd I to the Persian throne (c. 399), Saint Maruthas was accredited to his court as ambassador of the Roman Emperor. This happened after Saint Maruthas set off to Constantinople to plead with the Emperor Arcadius to protect Persian Christians, and being respected by both the Roman Emperor and the Persian Shah, he was able to bring peace and understanding between the two empires.
Among many miracles, he cured King Yazdegerd of his migraines, of which his Magi were not able to cure him, thereby winning his favor and peace for his Christian subjects.* Since Yazdegerd wanted in gratitude to bestow some princely gift on him, the Bishop asked for the bodies of the holy Martyrs who had borne witness to Christ in Persia during the terrible persecution of Shapur II (340-379).** Their relics were willingly granted, and the Bishop translated them to his See of Mayerferqat, which became known from then on as Martyropolis. 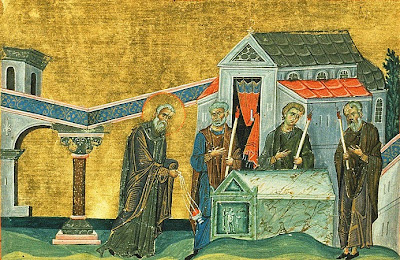 Some years later, he returned to Persia to take part in the Synod of Seleucia (410), which reorganized the Persian Church. He assisted in the election of a new Catholicos and never ceased in his care for the peace and good order of the Church in the Sassanid Kingdom.
The Mazdean Magi were jealous of the royal favor accorded to the Bishop. They hid someone in the vaults of the fire-temple who, when the King was offering his sacrifice, admonished him as though a god were speaking: "I do not accept you for you have set Maruthas, the leader of the Galileans, at your side." Led by the grace of God, Maruthas entered the temple and exposed the plot by having the floor taken up at the place where the voice was heard. When the imposter confessed that he had been put up to it by the Magi, the King had them arrested. He would have had them all put to death with their wives and children but for the intercession of the compassionate Maruthas. In the event, only twelve of them suffered.
The King then gave the holy Bishop leave to build as many churches in the Kingdom as he would, he allowed Christians freedom of worship, and accorded the decrees of the Synod of Seleucia the force of law. As for the blessed Maruthas, he fell asleep in peace in his cathedral city of Martyropolis and the day of the consecration of the church there, and joined the choir of the holy Martyrs around the year 420.*** The relics of Saint Maruthas were later transferred to Egypt and placed in a skete monastery of the Mother of God.


Notes:
* Some say that he won the King's favor by freeing his daughter of an evil spirit.
** It is estimated that during his reign, around 16,000 Christians in Persia suffered martyrdom.
*** After the repose of Saint Maruthas, Bishop Abdas of Susa, in his extreme zeal, laid waste one of the Zoroastrian temples and refused to rebuild it. This sparked a renewal of the persecutions against the Christians by the successor of Shah Yazdegerd, his son Vararanes, by influence of the Magi.
John at 11:08:00 AM
Share
‹
›
Home
View web version