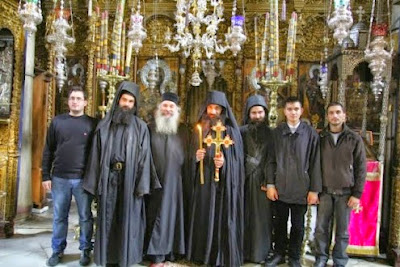 Fr. Evangelos Karakasis, an agronomist and beekeeper, during the Divine Liturgy on Sunday celebrated in Docheiariou Monastery on Mount Athos, attended the tonsure of the monk Onouphrios, one of his eight children. Now six of his eight children have become monastics.
Three of his sons were leading a monastic life in Docheiariou, and his two daughters are leading a monastic life in the Monastery of Theoskepastos, a dependency of Docheiariou Monastery in Soho, Thessaloniki. All are graduates of Aristotle University of Thessaloniki.
A quick search on the internet revealed that Fr. Evangelos Karakasis is not just the priest of the Church of Saint Paul in Methoni. He is also an agronomist, beekeeper and researcher, a graduate of Aristotle University of Thessaloniki with a degree from the same University in the genetic improvement of bees.
And he is not alone.
At his side stands from his student years his Presvytera, Aristea Malakasis-Karakasis, also an agronomist by profession.
Source: Translated by John Sanidopoulos.