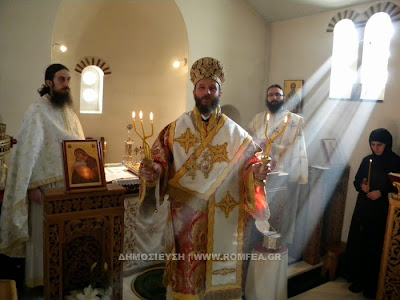 On Saturday, 7 February 2015, which was the feast of Saint Gregory the Theologian according to the Julian Calendar, His Beatitude Archbishop Jovan of Ochrid celebrated the Divine Liturgy in the Chapel of Saint Maximus the Confessor, located in the Stavropegic Monastery of Saint John Chrysostom in Bitola.
It had been nearly three and a half years since Archbishop Jovan had received Holy Communion (he previously served a Divine Liturgy on February 3rd as well). In his sermon he spoke about Saint Gregory the Theologian, and the theological experiences he had while in prison. Afterwards the faithful present rejoiced to kiss his hand and receive his blessing, as well as ask him questions.
That evening he flew to St. Petersburg, Russia where he will be treated for his illness at the expense of the Patriarchate of Russia.
See more photos here.
John at 5:19:00 PM
Share
‹
›
Home
View web version