Why Is Lot Called "Righteous" If He Offered His Daughters To Be Raped? 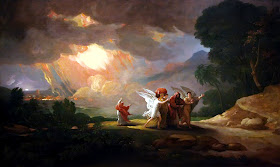 In Genesis 19:6-8 we read about Lot offering his daughters to be raped by the Sodomite mob, rather than his angelic guests. Yet, the New Testament describes him as "righteous Lot" (2 Peter 2:7). Does Scripture then justify rape?

A non-biased reading of this passage would never come to the conclusion that Scripture justifies rape based on this passage. 2 Peter 2:7 doesn't say that he was righteous because he offered his daughters to be raped, but because he "was distressed by the filthy lives of lawless men". Righteousness depends on acknowledging evil, separating from it, and repenting of it when one falls into it rather than justifying it. Lot offered his daughters to the Sodomites in order to protect his guests, whom he recognized as angels of the Lord. In doing so, he was choosing to commit one evil in order to avoid another, out of his great love and reverence for God. He feared the Sodomites would break down his door to get to the angels, and foolishly believed that those men could actually overcome and rape the angels. Yet he also feared God's wrath and judgment over that more than over the sin of offering his daughters in place of the angels. Lot interceded also on behalf of his guests in accordance with his duties as host, since hospitality is a most sacred virtue, but made the mistake of placing them above his duties as a father by offering his two daughters to the wicked designs of the Sodomites. Clearly he was wrong, and the angels demonstrate this by not allowing such a thing. The angels responded by blinding everyone to protect Lot's family, so that the rape did not take place.

Just as Abraham was a man of righteousness and hospitality, so also was his nephew Lot in many similar ways, though they often did wrong. Yet his reverence for God was so great that he was willing to offer up his daughters, just as Abraham was willing to offer up his son Isaac in sacrifice. God however prevented both, since they proved their devotion to God. They are models of perfect love and devotion to God, as Christ pointed out when He said: "Whoever loves son or daughter more than Me is not worthy of Me" (Matt. 10:37). Perhaps both had enough faith in God that they knew no harm would ever come to their children.

Also, if Lot was so righteous that he would do no wrong, God would have spared the city for his sake. In Genesis 18:17 God tells Abraham that he will spare the city for the sake of the righteous in it, but the angels warn Lot that if he does not flee he will be destroyed along with the city (Gen. 19:15-16). That he and his family were less than ideally noble is also indicated by the fact that his wife disobeys the angels and is turned into a pillar of salt (Gen. 19:26), and by the fact that his daughters get their father drunk and sleep with him to have children (Gen. 19:30-38). Lot however maintains his righteousness, because throughout his life he continued to be "distressed by the filthy lives of lawless men," including the sinful action of his wife's disobedience and of his daughters when he became sober.

Further, the Bible itself offers a bit of commentary on this episode in the literary parallel between Genesis 19 and Judges 19 (the rape of the Levites concubine). In that story, the events are quite similar and the literary parallels are many and explicit. The clear intent of the author was to recall the story of Genesis 19. But the events of Judges 19 are all the more terrible because they take place in Israel (v. 30) rather than in Gentile territory. There the rape is clearly perceived as grossly wicked - so wicked that the refusal of the town to submit to discipline provokes a war (chs. 20-21). The point for our discussion is simply that the obvious literary parallel portraying the rape of the Levite's concubine as sinful depends upon Lot's act in Genesis 19 being sinful.