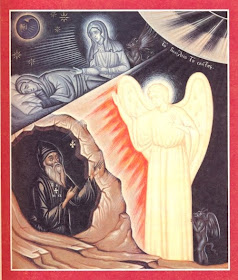 - The reason why we have decided to speak about dreams here is obvious. When we leave our home and relatives for the Lord’s sake, and sell ourselves into exile for the love of God, then the devils try to disturb us with dreams, representing to us that our relatives are either grieving or dying, or are captive for our sake and destitute. But he who believes in dreams is like a person running after his own shadow and trying to catch it.

- The demons of vainglory prophesy in dreams. Being unscrupulous, they guess the future and foretell it to us. When these visions come true, we are amazed; and we are indeed elated with the thought that we are already near to the gift of foreknowledge. A demon is often a prophet to those who believe him, but he is always a liar to those who despise him. Being a spirit he sees what is happening in the lower air, and noticing that someone is dying, he foretells it to the more credulous types of people through dreams. But the demons know nothing about the future from foreknowledge. For if they did, then the sorcerers would also have been able to foretell our death.

- Devils often transform themselves into angels of light and take the form of martyrs, and make it appear to us during sleep that we are in communication with them. Then, when we wake up, they plunge us into unholy joy and conceit. But you can detect their deceit by this very fact. For angels reveal torments, judgments and separations; and when we wake up we find that we are trembling and sad. As soon as we begin to believe the devils in dreams, then they make sport of us when we are awake, too. He who believes in dreams is completely inexperienced. But he who distrusts all dreams is a wise man. Only believe dreams that foretell torments and judgment for you. But if despair afflicts you, then such dreams are also from devils.

From The Ladder of Divine Ascent, Step 3; Translated by Lazarus Moore (1959).