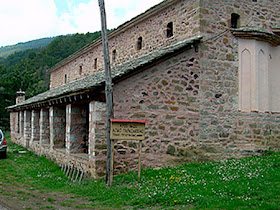 By John Sanidopoulos
An icon of St. Nicholas, stolen eight years ago from the St. Paraskevi "Goudovasdas" Monastery in Kalomira, in the Kalambaka area of Greece, has been found in a gallery in Germany, officials said.
The icon is said to be unique and of great archaeological value, besides its immeasurable sacred value. It dates from 1779 and was stolen from the shrine inside the monastery together with many other icons in the summer of 2004, a few weeks after the feast of the monastery. Along with the icons, the carved pulpit and sanctuary doors were also stolen. The list of holy icons stolen was compiled by the Holy Metropolis of Stagoi and Meteora and the 19th Ephorate of Byzantine Antiquities.
Interpol spotted the icon in an auction list, and it is expected to be given to the Byzantine Museum in Athens and then sent back to St. Paraskevi Monastery. The theft proved that it was the work of an organized gang of antiquities that ran rampant in the region.
Fr. John Latsaras, the priest of this church who will receive back the icon, announced this good news, to the joy of all parishioners.
As for the monastery, it is named "Goudovasdas" because that is the old name for Kalomira.
John at 10:26:00 AM
Share
‹
›
Home
View web version