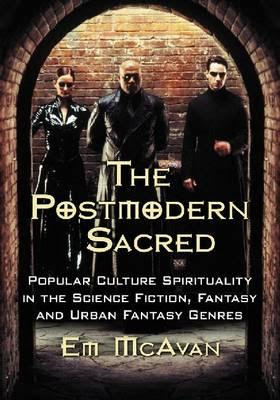 Emily McAvan’s interesting thesis, summarized in an issue of the Journal of Religion and Popular Culture, has now been expanded in her recently published thesis The Postmodern Sacred: Popular Culture Spirituality in the Science Fiction, Fantasy and Urban Fantasy Genres. Below is an abstract of McAvan's earlier thesis along with a link, together with a description of her book:
By Emily McAvan
Division of Arts
Murdoch University
Journal of Religion and Popular Culture
Vol. 22(1)-Spring 2010
Abstract
I argue that the return of the religious in contemporary culture has been in two forms: the rise of so-called fundamentalisms in the established faiths—Christian, Jewish, Muslim, Hindu, even Buddhist—and the rise of a New Age style spirituality that draws from aspects of those faiths even as it produces something distinctively different. I argue that this shift both produces postmodern media culture and is itself always already mediated through the realm of the fictional. Secular and profane are always entangled within one another, a constant and pervasive media presence that modulates the way that contemporary subjects experience themselves and their relationship to the spiritual. I use popular culture as an entry point, an entry point that can presume neither belief nor unbelief in its audiences, showing that it is “unreal” texts such as Lord of the Rings, Harry Potter, The Matrix, The Passion of the Christ and Left Behind that we find religious symbols and ideas refracted through a postmodernist sensibility, with little regard for the demands of “real world” epistemology. I argue that it is in this interplay between traditional religions and New Age-ised spirituality in popular culture that the sacred truly finds itself in postmodernity.
Read the entire study here.
And below is the description of her recent book The Postmodern Sacred:
From The Matrix and Harry Potter to Stargate SG:1 and The X-Files, recent science fiction and fantasy offerings both reflect and produce a sense of the religious. This thoughtful volume examines this pop-culture spirituality, or “postmodern sacred,” showing how consumers use the symbols contained in explicitly “unreal” texts to gain a second-hand experience of transcendence and belief. Topics include how media technologies like CGI have blurred the lines between real and unreal, the polytheisms of Buffy and Xena, the New Age Gnosticism of The DaVinci Code, the Islamic “Other” and science fiction’s response to 9/11, and the Christian Right and popular culture. Today’s pervasive, saturated media culture, this work shows, has utterly collapsed the sacred/profane binary, so that popular culture is not only powerfully shaped by the discourses of religion, but also shapes how the religious appears and is experienced in the contemporary world.