Who Is St. Demetrios Killing In His Icon? 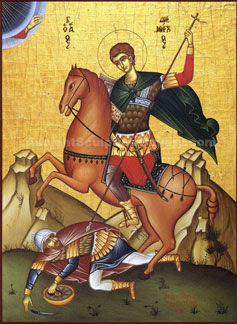 By John Sanidopoulos
Contrary to popular tradition, St. Demetrios in his icon is NOT depicted as killing Lyaios the Gladiator, who was actually killed by St. Nestor. Rather, this icon is an allegory and depicts the killing of the Bulgarian Tsar Kaloyan, whose name means "John the Good", but whom the Greek-speaking Romans called "Skyloyan" or "John the Dog".
In 1202 Tsar Kaloyan united the Bulgarian Empire with the Papacy in order to return his Kingdom to the former glory of the First Bulgarian Kingdom. Pope Innocent III had promised the Tsar that if he united with the Papacy, he would crown him King and make the head of the Bulgarian Church an Archbishop (originally he wanted to be emperor and the head of the church a patriarch). Though he was later betrayed by the Latins after the Fourth Crusade and defeated them in Adrianople after becoming allies with the East Romans, the Eastern Romans later saw him as a threat. For this the Tsar mercilessly turned against his allies, and he took on the name "Romaioktonos" or "Romanslayer", a counter-derivative from Emperor Basil II's "Boulgaroktonos" or "Bulgarslayer".
Kaloyan's troops killed Boniface of Montferrat (4 September 1207), the Latin ruler of the Kingdom of Thessaloniki. Seeking to take advantage of that situation, Kaloyan advanced on the city and besieged it with a large force, but was murdered by his own Cuman commander Manastras at the beginning of October 1207. Some attribute this killing to St. Demetrios, the patron of Thessaloniki, but others say it was through Divine Providence through the prayers of St. Demetrios to protect his city.
The popular icon of St. Demetrios slaying Tsar Kaloyan probably dates to the 15th century from the Bulgarian Dragalevtsi Monastery or possibly Decani Monastery. He is depicted in the first next to the icon of St. Mercurius, who is similarly depicted killing Emperor Julian the Apostate for similar reasons (see photo below, with St. George above and the Theotokos in the center). Both rulers were killers of the Orthodox Christian population of the Roman Empire. Also, Kaloyan was seen to betray Orthodoxy when he was crowned by Pope Innocent III. St. Demetrios is very much loved by the Bulgarians and they honor him even more than one of their heroes/kings who turned against Orthodoxy. Some Bulgarian biographies even claim that St. Demetrios' father was from Bulgaria, so much did they love and honor him. 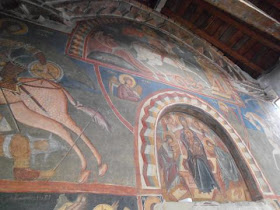