Dark Awakenings: The Intersection Between Religion and Horror 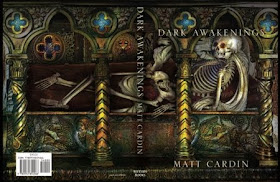 Author, scholar, teacher, musician, and theologian Matt Cardin has compiled his new weird supernatural fiction and studies on the interplay between horror and religion in his new book, Dark Awakenings, which has been released by Mythos Books and available through Amazon.
DESCRIPTION:
From its earliest origins, the human religious impulse has been fundamentally bound up with an experience of primal horror. The German theologian Rudolf Otto located the origin of human religiosity in an ancient experience of "daemonic dread." American horror writer H.P. Lovecraft asserted that weird supernatural horror fiction arose from a fundamental human psychological pattern that is "coeval with the religious feeling and closely related to many aspects of it." The American psychologist William James wrote in his classic study The Varieties of Religious Experience that the "real core of the religious problem" lies in an overwhelming experience of cosmic horror born out of abject despair at life's incontrovertible hideousness.
In Dark Awakenings, author and scholar Matt Cardin explores this primal intersection between religion and horror in seven stories and three academic papers that pose a series of disturbing questions: What if the spiritual awakening coveted by so many religious seekers is in fact the ultimate doom? What if the object of religious longing might prove to be the very heart of horror? Could salvation, liberation, enlightenment then be achieved only by identifying with that apotheosis of metaphysical loathing?
This volume collects nearly all of Cardin's uncollected fiction, including his 2004 novella "The God of Foulness." It contains extensive revisions and expansions of his popular stories "Teeth" and "The Devil and One Lump," and features one previously unpublished story and two unpublished papers, the first exploring a possible spiritual use of George Romero's Living Dead films and the second offering a horrific reading of the biblical Book of Isaiah. At over 300 pages and nearly 120,000 words, it offers a substantial exploration of the religious implications of horror and the horrific implications of religion.
Read more here.
For an interview with Matt by Theofantastique on this subject and his essay “Gods and Monsters, Worms and Fire: A Horrific Reading of Isaiah”, read here.
John at 11:00:00 AM
Share
‹
›
Home
View web version