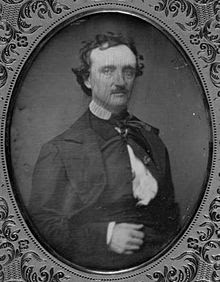 Excerpt from the Russian translation of the introduction to The Tell-Tale Heart, The Black Cat, and The Devil in the Belfry titled:
Three Tales of Edgar Poe
By Fyodor M. Dostoevsky (Vremia, 1861)
Two or three stories by Edgar Poe have already been translated and published in Russian magazines. Here we present to our readers three more. What a strange, though enormously talented writer, that Edgar Poe! His work can hardly be labeled as purely fantastic, and in so far as it falls into this category, its fantasticalness is a merely external one, if one may say so. He admits, for instance, that an Egyptian mummy that had lain five thousand years in a pyramid, was recalled into life with the help of galvanism. Or he presumes that a dead man, again by means of galvanism, tells the state of his mind, and so on, and so on. Yet such an assumption alone does not make a story really fantastic. Poe merely supposes the outward possibility of an unnatural event, though he always demonstrates logically that possibility and does it sometimes even with astounding skill; and this premise once granted, he in all the rest proceeds quite realistically. In this he differs essentially from the fantastic as used for example by Hoffmann. The latter personifies the forces of Nature in images, introduces in his tales sorceresses and specters, and seeks his ideals in a far-off utterly unearthly world, and not only assumes this mysterious magical world as superior but seems to believe in its real existence. . . Not so Edgar Poe. Not fantastic should he be called but capricious. And how odd are the vagaries of his fancy and at the same time how audacious! He chooses as a rule the most extravagant reality, places his hero in a most extraordinary outward or psychological situation, and, then, describes the inner state of that person with marvelous acumen and amazing realism. Moreover, there exists one characteristic that is singularly peculiar to Poe and which distinguishes him from every other writer, and that is the vigor of his imagination. Not that his fancy exceeds that of all other poets, but his imagination is endowed with a quality which in such magnitude we have not met anywhere else, namely the power of details. Try, for instance, yourselves to realize in your mind anything that is very unusual or has never before occurred, and is only conceived as possible, and you will experience how vague and shadowy an image will appear before your inner eye. You will either grasp more or less general traits of the inward Image or you will concentrate upon the one or the other particular, fragmentary feature. Yet Edgar Poe presents the whole fancied picture or events in all its details with such stupendous plasticity that you cannot but believe in the reality or possibility of a fact which actually never has occurred and even never could happen. Thus he describes in one of his stories a voyage to the moon, and his narrative is so full and particular, hour by hour following the imagined travel, that you involuntarily succumb to the illusion of its reality. In the same way he once told in an American newspaper the story of a balloon that crossed the ocean from Europe to the New World, and his tale was so circumstantial, so accurate, so filled with unexpected, accidental happenings, in short was so realistic and truthful that at least for a couple of hours everybody was convinced of the reported fact and only later investigation proved it to be entirely invented. The same power of imagination, or rather combining power, characterizes his stories of the Purloined Letter, of the murder committed by an orangutan, of the discovered treasure, and so on.
John at 11:01:00 AM
Share
‹
›
Home
View web version