Evidence of Torture in the Relics of St. Anastasia the Roman 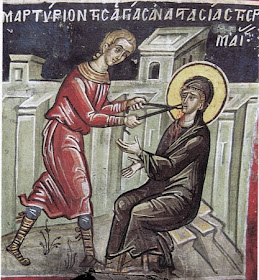 During tonight's Vesper service for St. Anastasia the Roman, an esteemed friend (God keep him well) told me the following:
"Do you hear the troparion that says 'distortions of the body'? Well, when I went to Gregoriou Monastery on Mount Athos, I saw something that shocked me. The body is preserved with the skin and she is kept there almost entirely whole, except for her skull. As many of us went, we saw that the toes on her feet were turned and were in line with her leg! Her nerves were protruding here and there! And I said: 'What is going on here?' But later a monk explained to us, that when she was being tortured, they put her on a machine that warped her body like this!"
Let me add that this is evidence for those who think the persecution of Christians are fairy tales or overblown, and that the martyrs are mythical and non-existent persons.
Source: Translated by John Sanidopoulos