Vampires and Religion in Popular Culture 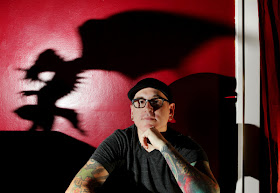 Vastly different worlds share similar symbolism.
JoAnne Viviano
October 28, 2012
The Columbus Dispatch
Walk into Jess Peacock’s home, and you’ll think he’s ready to throw one heck of a Halloween party.
Dolls in coffins bookend other creatures on the mantel, a crematorium sign is on one wall, prop skulls and gargoyles lurk about, and Abraham Lincoln: Vampire Hunter watches from a movie poster.
But the horror paraphernalia is no holiday collection; it represents both Peacock’s passion and his academic pursuits. The theology student examines the intersection of religion and vampires in popular culture. His scholarly materials include books on the undead, such as three copies of his “favorite novel of all time” — Stephen King’s Salem’s Lot.
“The vampire subgenre provides the unique opportunity, in some ways, to give symbolic flesh to theological concepts,” said Peacock, a graduate student at the Methodist Theological School in Ohio in Delaware who has presented his research in various venues and is writing a book. “A lot of people don’t know they’re talking about it or listening to it when they’re watching a movie or reading a book.”
Consider crosses, sacred ground, drinking blood and immortality.
The religious connotations stretch from pre-modern writings to the 21st century, where a new audience is entranced by the young-adult Twilight books and films and the True Blood HBO television series and books.
Vampires represent “sin, temptation, Satan and even God,” Peacock writes in his research, and the narrative “deals with issues of the soul, the hope for a life hereafter and the potential of forces beyond our control to deface that hope.”
That’s not to say that watching horror movies will make you embrace religion. Peacock says he doesn’t consider himself religious, and he has been watching vampires and other demons on the big screen since he was a child.
“It would be impossible to construct a coherent and sensible theological framework from which to develop any type of legitimate belief structure,” he writes. But the vampire, he adds, can be a “relevant and imaginative symbol” to spur conversation about heavy theological concepts generally reserved for churches and college campuses. Such topics might include the existence of evil in a world guided by a loving God; the fear and horror that come with awe of the divine; and liberation theology, which focuses on fighting oppression.
The vampire in American culture traces its root to pre-modern Slavic peasants and has morphed over the years to embody the changing fears and anxieties of society, said Dan Collins, an associate professor of Slavic languages at Ohio State University who teaches a course titled “Vampires, Monstrosity, and Evil: From Slavic Myth to Twilight.”
To those peasants, vampires represented the cosmic battle between good and evil, God and Satan, and were used to explain infant death, disease, loss of crops and cattle and other adversity, Collins said. In 1897, author Bram Stoker used Dracula to reflect the religious skepticism of his society and explore why harm comes to good people who develop into instruments of God to subdue the evil and restore justice.
Collins said the 20th century brought tormented, remorseful vampires whose evil natures were watered down and attributed to external hardships and psychological illnesses as society grappled to understand what made people do “evil” things. Think Anne Rice’s Interview with the Vampire, which portrays Lestat and Louis as not evil but tormented. Now on the scene are the Twilight vampires, including the undead Edward, a golden boy who resists premarital sex and avoids drinking human blood. This theme reflects the fears and anxieties of the teenage girls to whom the series is marketed, Collins said.
“The vampire has become the shadow side, the dangerous side of the human psyche,” he said.
Peacock said the recent changes could reflect a shift from the vampire as an overtly religious figure to a more-secular one, perhaps as a similar change takes place across society.
Consider the film Dracula 2000, in which the Prince of Darkness is revealed to be none other than Judas Iscariot, the apostle who betrayed Jesus Christ. (His death comes at the hands of a 21st century woman named Mary who works at a Virgin Megastore.)
Flash-forward about seven years: In the film 30 Days of Night, a woman cowers before a vampire, saying “Please, God. Please.” The villain asks, “God?” and after looking at the sky, shakes his head and declares, “No God.”
“The shift in theological tone is fascinating in and of itself,” Peacock said. “If there is a connection between a wane in religion and a wane in the vampire genre, that’s vastly fascinating."
John at 11:48:00 AM
Share
‹
›
Home
View web version