The Pateritsa (Staff) of St. Savvas the Sanctified 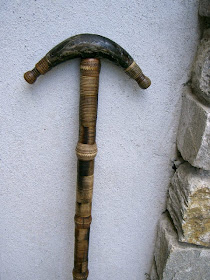 By John Sanidopoulos
When St. Savvas the Sanctified was near the end of his life (6th century), he told his monks to watch for one day in the distant future when an archbishop, a man of God bearing the same name as his, would come from a far-off western land. The monks were to give this man St. Savvas' pateritsa (pastoral staff) and a certain icon of the Panagia. They would know it was the right man when at the moment of his paying veneration at his tomb the tied up staff would fall to the ground. Two hundred years later, St. John of Damascus added his own wonderworking icon of the Panagia Tricherousa (Three Hands) to this inheritance to fulfill the prophecy of St. Savvas.
When St. Sava of Serbia visited the monastery of his namesake some 700 years after St. Savvas the Sanctified's repose, the monks still remembered the prophesy of their founder, and now found its fulfillment in St. Sava of Serbia. While he was paying veneration to the Saint’s tomb, the staff fell down. The miracle repeated the next day, and all doubts of the monks were gone. They knew for sure then that the Serb Sava was the one they had been waiting for. This is how the much-revered icon of the Panagia of Three Hands (through which the miracle of the restoration of St. John of Damascus' hand was accomplished), as well as the pateritsa, came to reside at the Serbian Hilandari Monastery on Mount Athos.
Today in Karyes there is a Cell which belongs to Hilandari Monastery that goes by the name Pateritsa. The ebony staff of St. Savvas, made from the tusks of an elephant, is within a cabinet of the north aisle of the Chapel of the Transfiguration of the Cell. 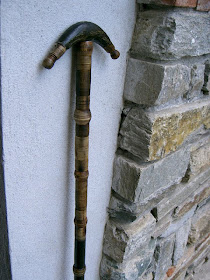 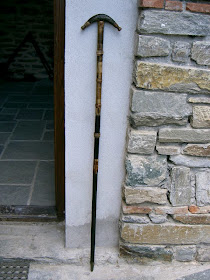