Scientists and the Fathers of the Church 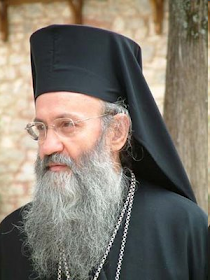 By Metropolitan Hierotheos of Nafpaktos
The Fathers of the Church studied the creation of the cosmos with a theological purpose. They renounced both materialism and metaphysics. Thus, the two philosophical orientations “in the beginning was matter” and “in the beginning was the idea” was contrasted with “in the beginning was the Word”. God is a person, He is love, because love is an uncreated energy of God. Therefore God is neither an idea nor matter. Later they say that God created the cosmos “out of nothing”, “without the existence of matter” but with His word which is His uncreated energy, which creates created beings.
Contemporary scientists are divided into two categories in interpreting new discoveries. In the first category are those who accept that some power outside of space and time created the cosmos. In the second category are the agnostics and atheists who interpret the creation of the cosmos without believing in the existence of God....
According to the Fathers, scientists can study the cosmos, examine what it is, how it happened, but they cannot enter into other areas, such as the existence or non-existence of God. Besides, the work of science is one thing and the work of Orthodox theologians is another and there should be no conflict or confusion between them. Science investigates the created world, matter, atoms, molecules, protons, particles, cells, genes, etc., while theology, which is empirical, deals with how man can know the person of God with His uncreated energies. Science progresses in various discoveries which should benefit and not harm people, and Orthodox theology gives answers to the spiritual matters of man and how he can acquire unconditional love towards God and his fellow man, at a time not only when the “death of God” is preached, but also the “death of one’s neighbor”.
Finally, no matter how many discoveries science makes, man hungers and thirsts for a personal God, for unconditional love, inner peace and freedom, for spiritual completeness. He wants to know what exists beyond creation, what happens after death, what is eternal life, etc.
Man is not an unreasonable being, but develops culture, nurtures spiritual principles, searches for God and seeks to experience His love. Hence, science is trying to give an explanation for creation and the establishment of the cosmos, but that which has great significance is Who created the cosmos and man. God is not an irrational force, nor a blissful being, but a person. He is the Logos who created the cosmos and within all of creation there are “logoi of being”, the energies of God.
Source: Ekklesiastiki Paremvasi, "Επιστήμονες καί Πατέρες τής Εκκλησίας", July 2012. Translated by John Sanidopoulos