Metropolitan of Aitolia: Encyclical On the Old Calendarists 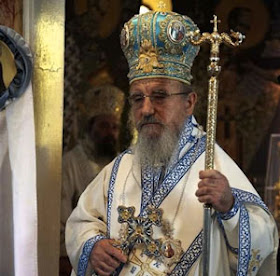 Press Release
In the Holy City of Messolonghi, the 20th of August 2012
Metropolitan Kosmas of Aitolia and Arkanania visited on Sunday 19 August 2012 Paliambela Vonitsa, where he liturgized in the parish of the Holy Church of Saint Athanasios and informed the faithful of the recent issue created in the region because of the desertion from the Orthodox Church and the transition of Archimandrite Anatolios Psychogios to "Bishop" of the schismatic Old Calendarists.
His Eminence, speaking on the issue of the Old Calendarists, said among other things: "I ask God to enlighten Fr. Anatolios to return. I have the responsibility as a Bishop to inform everyone and I encourage everyone to have no spiritual communication or relationship... And of the same I ask that he come to repentance."
Metropolitan Kosmas of Aitolia and Arkanania, having previously contacted and informed the Ecumenical Patriarchate in Constantinople, and explained the events competently to the Holy Synod of the Church of Greece, issued an Encyclical Note to inform the population, which was read in the Holy Churches of the region during the Divine Liturgy on 19 August 2012.
Also, the Metropolitan with the decision of Act no. 55/16.8.2012 revoked the granted license to liturgize in the private Holy Church of Saint Kosmas the Aitolos in Paliambela Vonitsa and "prohibits its liturgizing hereafter, duly ordering its closure."
Please find enclosed the text of the Encyclical, as well as the Act of the Metropolitan.
From the Press and Communication Office of the Holy Meteropolis.
+++
Encyclical
THE GREEK REPUBLIC
The HOLY METROPOLIS OF AITOLIA AND AKARNANIA
Archbishop Damaskinou 10
302 00 Mesolongion
Tel: 26310-22322, 22421
Fax: 26310-28701
Website: www.imaa.gr
E- mail: imaa@otenet.gr
In the Holy City of Messolonghi, the 17th of August 2012
Number Reference: 743
To All and Especially to the Parish Priests of the Most Sacred Regions of Amphilochia, Vonitsa and Katounes.
For the present, as your spiritual father, who loves you and ministers your salvation, I wish to inform you on a topic that arose recently in our region, and I ask that you listen carefully. I sincerely want to say and assure you that I am not moved by any agenda or personal ambition.
The only thing that stimulates me to update you is the glory of our Triune God and your salvation. Archimandrite Anatolios Psychogios is known to all. He originates from our region, and he previously founded and operated the "International Academy of Saint Kosmas Aitolos" in Paliambela Vonitsa, and many times we co-liturgized in various Holy Churches of our Holy Metropolis.
We honored him and received him with love in our Holy Metropolis. Unexpectedly however he joined the schismatic Old Calendarists, and was elected and ordained "Bishop" in the sectarian faction of "Archbishop" Auxentios.
We do not have the time right now to explain his joining the schismatics of the Old Calendar. But I have to acknowledge to you that the "Bishops" of the Old Calendarists neither have apostolic succession, nor canonical ordination, nor do their Mysteries have validity. So the salvation of Christians following them is dubious and weak.
Besides this, I ask and urge you all paternally, to have no spiritual relationship or dependence with the severed from our Church, Fr. Anatolios.
Source: Translated by John Sanidopoulos
John at 12:11:00 PM
Share
‹
›
Home
View web version