The Holy Church of Panagia Alexiotissa dates prior to 1713. This parish church also serves as a cemetery located in the upper city of Patras. Tradition says it was an old chapel of Gerokomeio Monastery.

The name "Alexiotissa" stems from the old verb "alexo" which has origins from the root "alex" which means "to avert". The people of this region thus place their hopes in the Theotokos to avert all evils and destructions that may come their way. The church holds an icon titled Panagia Alexiotissa that is old, with artistic value and silver lining.

The former Metropolitan of Patras, Nikodemos, established the feast of Panagia Alexiotissa in 1994 to be celebrated annually on the Synaxis of the Theotokos on December 26th. He also composed a Service of Praise and Supplication Service to Panagia Alexiotissa.

Within the Holy Altar there is a second Holy Altar dedicated to the Archangels together with an icon offered by the Union of Butchers in 1869. For this reason the church also celebrates on the feast of the Synaxis of the Archangels on November 8th.

Also, on the northeastern part of the church, there is a chapel dedicated to Saint Lazarus, who was four days dead and raised by Christ. Metropolitan Nikodemos dedicated this chapel on 15 June 1991 and celebrates on the Saturday of Lazarus as well as October 17th (the day his relics were transferred from Cyprus to Constantinople).

During the Revolution of 1821, the Turks burned alive the parish priest of this church, Papa George, and kidnapped his three children. His wife, the presvytera, sought out her children throughout the Ottoman Empire. She eventually found one of her sons, Constantine. In 1972 the Achaia company of Patras erected a monument in memory of Papa George in the precincts of the church. 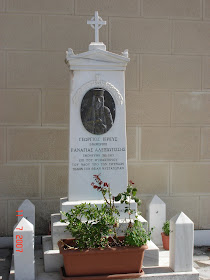 Listen to the Supplication Service here.