The Original Words To The Song "Good King Wenceslas" 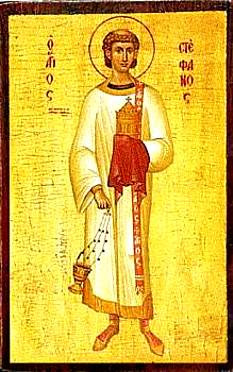 We remember Saint Stephen the Protomartyr on December 27, two days after Christmas, while in the West he is remembered on December 26. Hence the popular Christmas Carol:

Good King Wenceslas looked out
On the feast of Stephen,
When the snow lay round about
Deep and crisp and even.

This describes an action of King Wenceslas on the day after Christmas Day. The tune used with this song is older than the words (written circa 1850) and was previously used with a hymn often sung on the feasts of St. Stephen and other martyrs. It begins:

Christian friends, your voices raise.
Wake the day with gladness.
God himself to joy and praise
turns our human sadness:
Joy that martyrs won their crown,
opened heaven's bright portal,
when they laid the mortal down
for the life immortal.

This hymn was written by Saint Joseph the Hymnographer in the 9th century.