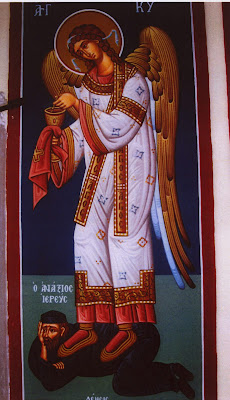 The icon above is located in the Cemetary Church of All Saints in the town of Perama of Rethymno in Crete, the seat of the municipality of Mylopotamou, and was painted by the iconographer Emmanuel Sephake.

The prototype for this icon is in the historic Church of the Holy Trinity in the same town (probably from the Venetian era), near the Monastery of Arkadiou in Rethymno, and is found in the Holy Sanctuary, roughly next to the Holy Prothesis table. The priest serving in the Sanctuary sees it across from him, though it is not visible to those outside the Sanctuary. It is directed, therefore, to the priest, and is aimed at his constant moral diligence.

The icon depicts an angel standing on a priest holding the Holy Chalice and dressed in priestly vestments. It bears the inscription "The Unworthy Priest".

This icon, it is assumed, is based on an old story which says that once there was a priest who got drunk one Saturday night, and went the next day to serve Divine Liturgy. However, as his wife was going to church, she saw him outside, tied to a tree. When she went inside, she saw him again, serving Divine Liturgy! She was surprised. After the Liturgy, her husband revealed how an angel prevented him from liturgizing, and served Divine Liturgy in his stead and with his appearance.

The meaning of the story is that, no matter how unworthy a priest may be, this does not hinder the validity of the Holy Mysteries, for it is the grace of God which completes them, not the priest himself. But priests should be worthy of their work, otherwise they will face consequences, now and in eternity.