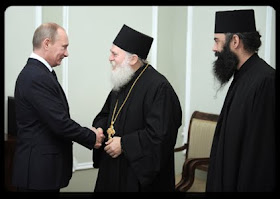 The arrest of Cypriot monk Abbot Ephraim just before Christmas was an act of 'unprecedented savagery', said sources within the Moscow Orthodox Patriarchate as reported by Kathimerini and Sky news channels in Athens.

The Russian and Greek Orthodox churches have very close ties and it is expected that there will be more reactions against Ephraim's arrest on charges of money laundering in connection with a property exchange between Vatopaidi Monastery and the state, says the report.

Russian Orthodox churchmen have made representations to Mount Athos and Patriarch Bartholomew saying that Ephraim's arrest is disproportionate to the charges. The monk's health is not good and the Greek government should ensure an objective, open-minded, honest and democratic process, said the Russian church in a message broadcast by many Russian media channels. Ephraim is bedridden and under guard in his monk's cell in Vatopaidi Monastery.

There is speculation that there are political reasons behind Ephraim's arrest as he is considered to be Russian Prime Minister Vladimir Putin's spiritual father and recently visited Moscow to meet with him. Russia-Greece relations are at their worst point in decades, say analysts, amid perceived insults to the Russian ambassador in Athens after former Prime Minister George Papandreou refused to meet with him, and the perception that the Greek government is overly influenced by Russia's rival for influence in the region - the US.

Russian and US oil-and-gas companies are also eyeing immense reserves of hydrocarbons around Greece and Cyprus, and there is more speculation that Ephraim - who has long held influence with Putin - has been taken out of the picture while the latest round of bidding for undersea hydrocarbon exploration gets underway.

Whether Ephraim's arrest is a deliberate insult directed at Putin, or just a case of Greece's slow justice system finally swinging into action remains to be seen, but one thing is certain, the timing of the monk's arrest just before Christmas is as provocative a move as any towards Orthodox Church believers.

In further developments, Cyprus Archbishop Chrysostomos II said that the clergy and monks have to be very careful to stay away from business transactions, in a breathtaking example of the pot calling the kettle black. The Cyprus Orthodox Church is one of the wealthiest in the world, with interests ranging from banking, property and hotels to beer-making.