The Myrrhgushing Miracle of St. Demetrios in 1987: A Testimony 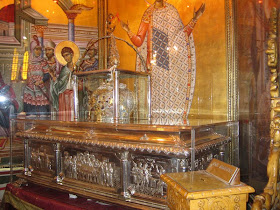 It was October 26, 1987. The time was past 10:00 p.m. The city was celebrating the memory of the contest of its patron saint, St. Demetrios, and the freedom from the nearly five hundred years (1430-1912) occupation by the Ottomans. The Church of St. Demetrios with open doors received its nightly venerators, who were kneeling in front of the silver casket with the holy relics of the Myrrhgusher. At that moment there must not have been more than thirty to forty people in the church. A circle of about ten women were in front of the shrine, chanting the Paraklesis of the Saint. The only clergyman who attended, was the young and newly-ordained deacon of the church with his deaconess-wife. The then head of the church and now Metropolitan Panteleimon of Beroia, Naousa and Campania, had ordered them to be there and wait for him.

Suddenly, the women singing the Paraklesis began to yell. The deacon ran to them and the women, with mixed feelings, showed him the casket. It was literally bathed in an oily myrrh formation (we say myrrh because the smell was incomparable). One could have said with certainty that someone poured onto it at least two "buckets" of aromatic liquid (I use the word "buckets" to mean that the quantity of myrrh that slid down the solid walls of the silver casket to the embossed depiction was great).

The deacon for a moment was baffled: the Saint is gushing myrrh! Without any doubt at all about the miracle, and finding himself in a state of joy, surprise and excitement, he ran to bring cotton from some furniture of the sanctuary. He returned running and started wiping with cotton the myrrh from the outer walls of the shrine and gave parts of this fragrant cotton to pilgrims. He would wipe it up and the myrrh would not stop, but kept mystically flowing, without any visible source. Characteristically, one fact made an impression: with a large piece of cotton he wiped the myrrh of a smooth area of ​​the casket. The cotton wiped away the myrrh, like when you wipe a glass with a dry cloth, pressing it well and removing moisture that can exist on it. A woman wiped with the palm of her hand on the part of the shrine that had just been wiped. The deacon, with amazement, saw her hand wet by the oily yellow myrrh!

Meanwhile, the scent flooded throughout the church and overflowed from the open doors to St. Demetrios Street, attracting passers-by who rushed in to see what was happening and from where came this fragrance. Everyone headed to the casket with the relics of Saint Demetrios, who was not placed in the tomb (it had not yet been constructed), but in front of the iconostasis. 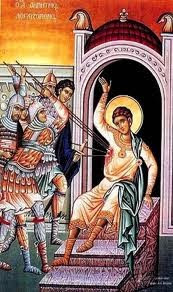 The pleasant surprises did not stop there! The pilgrims found that all the icons of the church, wherever they were, in the shrines or church, flowed myrrh. Indeed, the deacon saw pilgrims take out paper towels and wipe the glass protected icons of the church and the paper towels turned yellow from the myrrh which "ran" from both sides of the glass, interior and exterior. The size of the miracle did not leave the slightest room for doubt. We did not understand what we were witnessing, it was like a dream in the mist, but we lived it! We touched it with our hands, we saw it with our eyes, we smelled it with our sense of smell!

In a short time there formed a line of people with tears in their eyes venerating the casket of the Myrrhgusher, who realized why he was so nicknamed.

Meanwhile there arrived to the church the head priest and other clergy. They unlocked the openings of the casket and found the holy relics of the patron saint of Thessaloniki. Though fragrant, it was the particular scent of sacred relics. The fragrance of myrrh was different and distinctive.

The blessed Metropolitan Panteleimon II Chrysofakis of Thessaloniki, attributed the miracle of the myrrhgushing of St. Demetrios to this fact: That evening, at the gala ceremony at the University for the freedom of Thessaloniki, the keynote speaker ignored in his speech entirely the Saint and there was no reference to him. Saint Demetrios spoke with his myrrhgushing that he never left the city of Thessaloniki, so now he is always present, and this is what saved her from slavery and from earthquakes, but complains when Thessalonians prove ungrateful and distance themselves from Christ and His saints.

24 years have passed since then. I was the then deacon of the church, and now a priest in Thessaloniki, and I write the facts as I remember. That moment was like living a mystery. I cannot describe what I felt! Joy, surprise, excitement, enthusiasm ... I cannot determine exactly. However, it is the events that reinforce belief that fill us with joy, hope and a sense of the presence of Christ and the saints. Our faith is "alive".

Fr. Christos Kotios
Vicar of the Holy Church of the Dormition of the Theotokos
Saranta Ekklesies, Thessaloniki