Paul Did Not 'Invent' Christianity 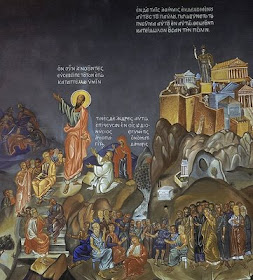 It's not rare to encounter people who claim that Paul "invented" Christianity. The basic idea is that Jesus taught a pure and ethical form of Judaism that focused on God and gracious living, while Paul developed a religion that worshiped Jesus rather than God. Though this idea literally makes no sense historically, it's gotten a lot of run. Even the occasional serious academic book "blames" Paul for perverting Jesus' message in inventing Christianity.

One easily appreciates the appeal of this position. In the first three Gospels -- Matthew, Mark and Luke -- Jesus speaks continually about the kingdom of God. He does not ordinarily speak about himself. In the fourth Gospel, however, Jesus talks about himself all the time. Even ancient Christians recognized this phenomenon. Writing around the year 200, Clement of Alexandria described John as "a spiritual Gospel" on the grounds that it relayed not the literal history of Jesus' career but its spiritual and theological significance. How did followers of Jesus move from a religion focused upon Israel's God and God's kingdom to a religion devoted to the person of Jesus? For many, the Apostle Paul fills that gap.

However, every bit of evidence we possess demonstrates that Paul did not, in fact, invent Christianity. Let's begin with how Paul came to follow Jesus in the first place. The book of Acts claims that Paul, having already persecuted some believers in Jesus, has a visionary encounter with the risen Christ. Paul himself describes that encounter as an "apocalypse," or a revelation. In any event, Acts agrees with Paul that the new apostle turned for support to a community of believers that already resided in Damascus.

If Paul invented Christianity, how did that community in Damascus come to exist? Paul's "conversion," as some call it, occurred within just two or three years of Jesus' death -- and already communities of Jesus followers were spreading beyond Judea and Galilee into Samaria, Syria and other parts of the ancient Mediterranean world.

Moreover, a look at Paul's missionary career debunks the notion that Paul invented Christianity. Having joined the believing community at Damascus, Paul later goes on to Syrian Antioch. The believing community there -- Acts refers to them being called "Christians" -- supports Paul and his partner Barnabas in their missionary activities (Acts 11:19-26). Obviously, the church would not have supported Paul if his teachings represented a radical departure from what they already knew.

Finally, we have Paul's letter to the churches in Rome. This is the only surviving Pauline letter that addresses a church he has never visited -- again, we see an influential church that Paul had no role in founding. He hopes to visit Rome, build a relationship with the churches there, and rely upon their support for an ongoing mission to Spain (Romans 15:23-24).

So we have a pattern. From Damascus in southern Syria, to Antioch in northern Syria, to Ephesus in Asia (today, Turkey), to Rome and hopefully on to Spain, Paul extends his missionary work to embrace the entire northern Mediterranean rim. As he does so, he relies upon churches located in major cosmopolitan cities to support his mission. All of these churches existed prior to and independent of Paul's mission, yet they support him. This could not be the case were Paul inventing a dramatically new interpretation of Jesus.

Many people note that Paul rarely quotes Jesus or appeals to stories from Jesus' life. That is true. Apart from the traditions of Jesus' crucifixion and resurrection, Paul explicitly refers only to Jesus' teaching concerning divorce (1 Corinthians 7:10) and the Lord's Supper (1 Corinthians 11:23-26). But he also insists that his teaching is consistent with that of Peter and the other apostles (1 Corinthians 3:22; 15:3-11; Galatians 1:18).

And while Paul rarely mentions specific examples from Jesus' sayings and ministry, his core values strongly reflect the influence of Jesus' teaching. Jesus taught his followers to lead by serving; so did Paul. Jesus promoted love as the greatest virtue; so did Paul. Jesus announced the coming kingdom of God; Paul taught that the kingdom would fully manifest itself upon the risen Jesus' return (1 Corinthians 15:24). Jesus' ministry involved an outreach to "sinners," prostitutes, lepers and other outcast persons; Paul extended the good news to Gentiles.

None of this is to deny the different sense one receives when one compares the Jesus stories to Paul's letters. Obviously things have changed from Jesus' ministry among Jews in Galilee and Judea to Paul's mission to Gentiles around the Mediterranean. For Paul, Jesus' resurrection required a dramatic reinterpretation of many things, including the significance of Jesus' ministry. However, Paul did not invent that idea; instead, he shared it with many other believers who were founding churches and cultivating communities far beyond his own reach.
John at 4:42:00 PM
Share
‹
›
Home
View web version