The Truth About Halloween 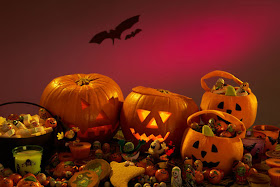 By Catherine Beyer
What is Halloween?

Halloween is a secular holiday combining vestiges of traditional harvest festival celebrations with customs more specific to the occasion such as costume wearing, trick-or-treating, pranksterism, and decorations based on imagery of death and the supernatural. The observance takes place on October 31.

Though it was regarded up until the last few decades of the 20th century as primarily a children's holiday, in more recent years common Halloween activities such as mask wearing, costume parties, themed decorations, and even trick-or-treating have grown quite popular with adults as well, making Halloween an all-ages celebration.

What does the name 'Halloween' mean?

The name Halloween (originally spelled Hallowe'en) is a contraction of All Hallows Even, meaning the day before All Hallows Day (better known as All Saints Day), a Catholic holiday commemorating Christian saints and martyrs observed since the early Middle Ages on November 1.

How and when did Halloween originate?

The best available evidence indicates that Halloween originated in the early Middle Ages as a Catholic vigil observed on the eve of All Saints Day, November 1.

It has become commonplace to trace its roots even further back in time to a pagan festival of ancient Ireland known as Samhain (pronounced sow'-en or sow'-een), about which little is actually known. The prehistoric observance marked the end of summer and the onset of winter, and is said to have been celebrated with feasting, bonfires, sacrificial offerings, and paying homage to the dead.

Despite some thematic similarities, there's scant evidence of any real continuity of tradition linking the Medieval observance of Halloween to Samhain, however. Some modern historians, notably Ronald Hutton (The Stations of the Sun: A History of the Ritual Year in Britain, 1996) and Steve Roud (The English Year, 2008, and A Dictionary of English Folklore, 2005), flatly reject the commonly held notion that November 1 was designated All Saints Day by the Church to "Christianize" the pagan festival. Citing a lack of historical evidence, Steve Roud dismisses the Samhain theory of origin altogether.

"Certainly the festival of Samhain, meaning Summer's End, was by far the most important of the four quarter days in the medieval Irish calendar, and there was a sense that this was the time of year when the physical and supernatural worlds were closest and magical things could happen," Roud notes, "but however strong the evidence in Ireland, in Wales it was May 1 and New Year which took precedence, in Scotland there is hardly any mention of it until much later, and in Anglo-Saxon England even less."

The earliest documented customs attributable to Halloween proper grew out of the tandem observances of All Saints Day (November 1), a day of prayer for saints and martyrs of the Church, and All Souls Day (November 2), a day of prayer for the souls of all the dead. Among the practices associated with Halloween during the Medieval period were the lighting of bonfires, evidently to symbolize the plight of souls lost in purgatory, and souling, which consisted of going door-to-door offering prayers for the dead in exchange for "soul cakes" and other treats. Mumming (or "guising"), a custom originally associated with Christmas consisting of parading in costume, chanting rhymes, and play-acting, was a somewhat later addition to Halloween.

Again, however, despite the obvious similarities between old and new, it's an overstatement to say these Medieval customs "survived" to the present day, or even that they "evolved" into modern Halloween practices such as trick-or-treating. There's no direct historical evidence of such a continuity. By the time Irish immigrants brought the holiday to North America in the mid-1800s, mumming and souling were all but forgotten in their home country, where the known Halloween customs of the time consisted of praying, communal feasting, and playing divination games such as bobbing for apples.

The secular, commercialized holiday we know today would be barely recognizable to Halloween celebrants of even just a century ago.

Is Halloween Christian, Pagan, or Secular?

The most straightforward answer is "secular." People who celebrate this day in a religious context generally do not call it Halloween, and the common practices associated with Halloween such as costuming and giving of treats are secular celebrations.

Christian Origins – All Hallows Eve and All Saints Day

However, Halloween evolved out of a Catholic holiday called All Hallows Eve, which occurs the day before All Saints Day, a general celebration of the saints on November 1.

In turn, All Saints Day originally was celebrated on May 13, and in the Orthodox Church is continues to be celebrated in late spring on the first Sunday after Pentecost, which in turn is seven weeks after Easter. Pope Gregory III is commonly credited with moving it in the 9th century to November 1, although the reasons for the move are debatable.

It is often argued, most commonly by neo-pagans and Christians who are against Halloween celebrations, that All Saints Day was moved to November 1 to co-opt a Celtic Irish celebration called Samhain.

Did the Catholic Church Co-opt Samhain?

There is no direct evidence to say they did. Gregory's reasons for moving it from May 13 to November 1 remain mysterious. A twelfth century writer suggested it was because Rome could support larger numbers of pilgrims in November than in May.

There are similarities. Samhain appears to have connection with the dead and may have involved communication with, placating of, or honoring of those who had died. All Saints is a celebration of dead saints, whom Catholics communicate with through prayer and offerings in the hopes of the saints acting as intermediaries between humanity and God.

However, Ireland is a long way from Rome, and Ireland was Christian by the time of Gregory. So the logic of changing a feast day throughout Europe to co-opt a holiday originally celebrated in a small portion of it has some substantial weaknesses.

What is Samhain and How Does it Relate to Halloween?

Historically, Samhain was an Irish Celtic harvest festival that marked the beginning of the winter season. It is not likely to have been held on a specific calendar day, but rather whenever the harvest was finished for the year.

Connections between Samhain and Halloween

There are a variety of Halloween traditions often credited to Samhain, such as costume wearing and the creation of hallowed out vegetables (predecessors to the jack-o-lantern). Readers are cautioned to be very wary of such claims. The Irish were non-literate before the coming of the Romans and even then left us no documents about their society. Most of what we know of them therefore comes from outside sources, often people who had never actually met the Irish or, more often, were writing hundreds of years after their pagan society had vanished.

In addition, the common claim is that ancient Celtic practices became folklore practices in the Christian period which is how they were transformed into modern Halloween celebrations. Again, the evidence is often sketchy, with most of it dating on a couple centuries back. Many of these claims of Halloween celebrations being ancient are therefore conjecture at best.

From the mythological stories (again, written many centuries after Christianization), Samhain appears to be a time of transitions when chaos reigns. The are references to the closeness of the Otherworld to the world of the living during this time, and it is commonly associated with divinations and remembrances of the dead. The mythology rarely if ever touches upon specific rituals performed by common people.

Today, a variety of neo-pagans celebrate Samhain. Many celebrate it the night of October 31, but some calculate the date via other methods such as astrologically or even by when local harvests are completed. Some even refer to the holiday as "Halloween" rather than as "Samhain," which merely further confuses the issue.

Modern celebrations manifest in a wide variety of ways. First, they may reflect mythology and beliefs specific to the celebrating neo-pagans. Wiccans and Druids, who belong to two separate neo-pagan religions, might hold significantly different celebrations, for example. Second, they frequently reference Northern European folklore or Celtic practices as they understand them to have been (which may or may not align with what was actually historically).

Modern Samhain celebrations are certainly not part of an unbroken pagan tradition. In fact, they post-date the secular emergence of Halloween.

Only in certain circumstances, and not historically.

Halloween is most directly related to the Catholic holiday of All Hallows Eve, although it has picked up a variety of practices and beliefs most likely borrowed from folklore. Even the origins of those practices are often questionable, with evidence dating back only a couple hundred years and older records being suspiciously mum about what might have been taking place around the end of October.

None of these things have anything to do with Satanism. In fact, if Halloween folk practices had anything to do with spirits, it would have been primarily to keep them away, not attract them. That would be the opposite of common perceptions of "Satanism."

When Anton LaVey formed the Church of Satan in the mid-20th century, he stipulated three holidays for his version of Satanism, the first organized religion to ever label itself Satanic. The first and most important was the Satanist's own birthday. The other two are Walpurgisnacht (April 30) and Halloween (October 31). Both dates were often considered "witch holidays" in popular culture and thus linked with Satanism. LaVey adopted Halloween less because of any inherent Satanic meaning in the date and more as a joke on those who had superstitiously feared it.

So, yes, Satanists do celebrate Halloween as one of their holidays. However, this is a recent adoption. Halloween was being celebrated long before Satanists had anything to do with it. Therefore, historically Halloween is not Satanic, and today it only makes sense to call it a Satanic holiday when referencing its celebration by actual Satanists.