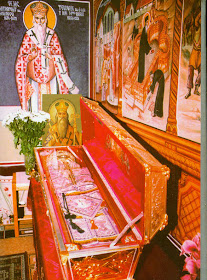 Holy Hieromartyr Teodosie of Brazi was born in the first half of the seventeenth century, somewhere near Brazi Monastery. His parents were descendents of free peasants since the time of Saint Stephen the Great. They took him to the divine services celebrated there. At the age of 18, he entered as a novice in this monastery, but he became a monk in Bogdana Monastery. Being a pious and quite intelligent monk, and knowing the Holy Bible and some of the writings of the Holy Fathers of the Church, he was ordained, in 1669, Bishop of Radauti. He often went to Putna Monastery to St. Stephen’s tomb, where a permanent candle was lit.

În 1671 he was sent to shepherd the Roman Diocese, where he remained until 1674, when he was elected as Metropolitan of Moldavia (Metropolitan Dosoftei had left the country for Poland, as a refugee), as a recognition of his pastoral activity and his high spirituality. The historian Ion Neculce (1672–1745) wrote in The Chronicles of the Land of Moldavia that the ruler of Moldavia, Dumitrascu Voda Cantacuzino, was one of the worst personalities in our history. He brought the Tatars in Moldavia to maintain the throne, paying a huge sum of money, which he collected from the poor people and from the income of the monasteries. The Metropolitan Teodosie went to the ruler and said: “What is this, your highness? Are you the Antichrist?” Dumitraşcu got angry and sent him to seclusion at Saint Sava Monastery in Iasi. Coming back from Poland, Metropolitan Dosoftei let him free, and Metropolitan Teodosie retired to Brazi Monastery, which he loved very much from his youth.. There he built a beautiful church dedicated to Saint George (sfântului Gheorghe). He took care of Bogdana Monastery too. He gave to these monasteries lands, vineyards, orchards, forests and mills.

The historian Ion Neculce also wrote that the Tatars came, at this time, like locusts and robbed the Moldavians, taking away all their fortunes. In 1694 a band of Tatars entered the Monastery of Brazi and tortured Metopolitan Teodosie to give them the money and the ecclesiastical objects and, as he refused, they killed him, cutting off his head. It was after the Feast of the Holy Cross.

The monks and Christians nearby the monastery buried him in the Church of Saint George, built by him. This church fell into ruins because of the frequent earthquakes of Vrancea County. But the abbot of Brazi Monastery discovered by a miracle the remains of Metropolitan Teodosie and buried them again in a cave, where the first hermits of Brazi Monastery, Teofilact and Sava, lived.

So during a period of the turbulent history of Moldavia the holy relics of Metropolitan Teodosie were discovered in a miraculous manner, they were then lost, then were rediscovered again in our days.

The first discovery of the relics occurred, as we said, in 1842, as witnessed by St. Antipa of Calapodesti, who was a novice at the time. This is what he tells us of the discovery:

"Before Archimandrite Demetrios became abbot of the Monastery of Brazi he lived a hard ascetic life in a large forest, where in a miraculous manner he found buried a container with gold coins. In the container he also found a note which said that this money belongs to Teodosie, who hid this foreseeing his martyric end at the hands of the Tatars. It further said that whoever finds them is obligated to build a monastery and three sketes, and when the third skete is finished his relics will be found.

He informed Metropolitan Demetrios of Iasi of this miraculous event and received the blessing to fulfill the last wish of the blessed Metropolitan. He built a large church, and having completed the third skete he decided to have dug in the garden a pit to prepare his own grave. But because the pit he ordered to be dug was destroyed, he decided to be present when they dug it. While digging they found the coffin with the holy relics. I was found worthy to see them with my own eyes and to venerate them, though they exuded an exquisite fragrance."

On 6 May 1842 the relics of the Saint were buried in the basement of the chapel. The skull of the Saint was kept in the Holy Altar of the monastery until its closure by the communists. Locals recalled that on the east side they would see at night a blue light and they all thought that something valuable was hidden there.

After 1989 when the skete was reopened, while digging in the basement of the chapel on 30 March 2000, the relics of the Holy Hieromartyr Teodosie were rediscovered. He was declared a saint by the Romanian Orthodox Church in October of 2003 and his feast is celebrated on September 22. 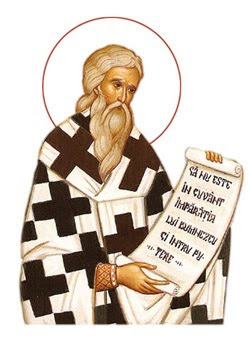 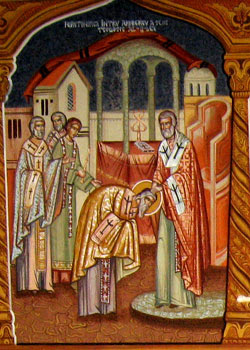 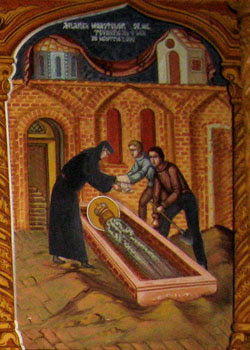 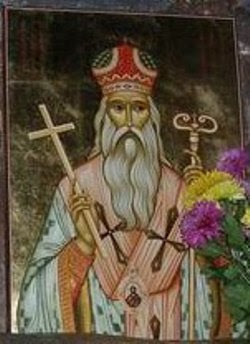 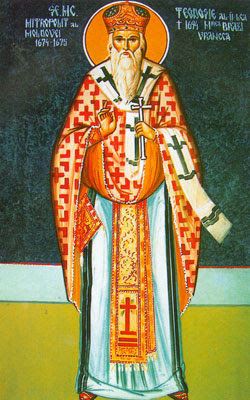 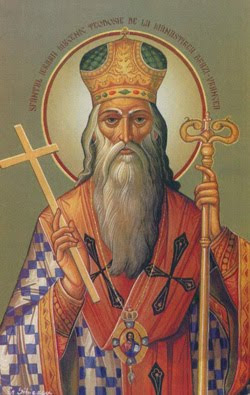 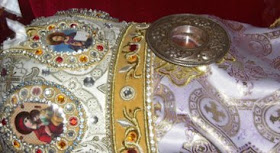