Are You A Fly Or A Honeybee? 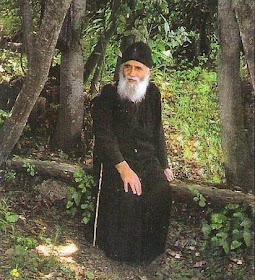 By Elder Paisios the Athonite

Some people tell me that they are scandalized because they see many things wrong in the Church. I tell them that if they ask a fly: "Are there any flowers in this area?" it will say: "I don't know about flowers, but over there in the heap of rubbish you can find all the filth you want." And it will go on to list all the unclean things it has been to. Now, if you ask a honeybee: "Have you seen any unclean things in this area?" it will reply: "Unclean things? No, I have not seen any; the place here is full of the most fragrant flowers." And it will go on to name all the flowers of the garden or the meadow. You see, the fly only knows where the unclean things are, while the honeybee knows where the beautiful iris or the hyacinth is.

Once a high school student came to my Kalyvi and knocked on the metal knocker on the door. Even though I was reading a stack of letters at the time, I decided to go and see what he wanted. "What is it you want, my son?" I asked. "Is this the Kalyvi of Father Paisios?" he asked me, adding, "I want to see Father Paisios." "This is his Kalyvi, but he's not here; he went to buy cigarettes," I told him. "It looks like he must have gone to help someone," he responded with a good thought. "He went to buy the cigarettes for himself," I told him. "He smoked them all and was desperate for a cigarette. He left me here alone, and I don't know when he'll be back. If he takes too long, I'll just leave." The student's watery eyes gave away his emotion and again he said with a good thought: "We torment Father Paisios." "Why do you want to see him?" I asked. "I just want to receive his blessing," he said. "What blessing do you expect to receive from him, you fool! He's deluded; I know him well. There's no grace in him. Don't waste your time waiting for him to return. He'll be grouchy; he may even be drunk, because he drinks too." In spite of all this, the young man was still having good thoughts. Finally, I told him: "I will wait for him a little longer, what do you want me to tell him?" "I have a letter to give him," he said, "but I will wait so I can receive his blessing." You see? No matter what negative things I related, he took them all with a good thought. When I told him about the need for cigarettes, his eyes began to well up with tears. "Who knows," he thought, "he must have gone to help someone." Other people are well-educated and read a great deal, but they still don't have the good thoughts of that young student! You demolish his thought, and he immediately creates a better thought and draws an even better conclusion. I marvelled at him! It was the first time I saw such a thing!