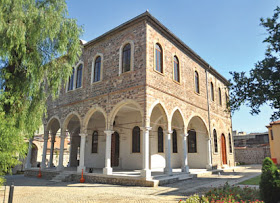 The historic Greek Orthodox Church Ayavukla (Saint Boukolos) in the western province of İzmir (Smyrna) has been under restoration for some time. A press museum will be constructed in an outbuilding when the restoration is complete.

The press museum is said to be the third biggest in Turkey after the press museums in Istanbul and Bursa. Additional outbuildings may be assigned various uses as the restoration continues.

A press museum will be housed in a restored outbuilding located in the western part of the garden of the Ayavukla Church, which is undergoing restorations under the direction of the İzmir Metropolitan Municipality.

The restoration work is one of many projects continuing in an area of 270 hectares between Kadifekale and Konak Square, İzmir Metropolitan Municipality officials told Anatolia news agency. The figure of Christ, which was painted over, as well as frescoes depicting St. John and angels Michael and Gabriel, were restored, and the building is now in a condition that will allow it to host social and cultural events organized by the municipality.

The press museum is said to be the third biggest in Turkey after the press museums in Istanbul and Bursa. Additional outbuildings may be assigned various uses as the restoration continues.

İzmir Journalists Association Executive Board Chairman Atilla Sertel said they had talks with Culture and Tourism Minister Ertuğrul Günay and added that they would receive support from the ministry after signing the long-term reservation protocol.

“Minister Günay promised us to give support for necessary regulations,” Sertel said. “There will be private objects of some journalists in the museum such as copies of the first newspapers, cameras used in the past, typewriters, telexes and printing machines. Information about the members of the İzmir Journalists Association from the past will be shown in an electronic environment in the museum. It will be a very different museum.”

The Greek Orthodox Ayavukla Church was built in the second half of the 19th century in the Basmane area. It was the only Greek Orthodox church to survive the fire of 1922, a major event in İzmir’s history.

The building served as the Asar-I Atika Museum under orders from Turkish republican founder Mustafa Kemal Atatürk in 1924. The museum was later relocated and the building was abandoned. It was registered as a “cultural item under preservation” and allocated to the İzmir Metropolitan Municipality by General Directorate of National Estate.

Modern methods are being applied during the restoration of the historic church. The walls and columns were painted one by one by restorers. The relief, restitution and restoration projects were coordinated by the İzmir Institute of Technology Architecture Department.

More photos of this church can be seen here.