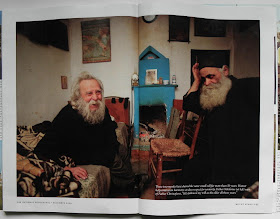 On Friday 18 March 2011 at the age of 88, Elder Nektarios (Karamanli) of Holy Trinity Lavra on Mount Athos fell asleep in the Lord in Karyes.

Elder Nektarios is probably most famous around the world for a picture of him and his disciple Christoforos that was circulated in National Geographic in December 2009 in a report on Mount Athos. The caption under their photo said: "These two monks have shared the same small cell for more than 50 years. Humor helps maintain harmony, as does respect for seniority. Father Nektarios (at left) says of Father Christoforos, 'He's followed my will as the elder all these years.'"

The fathers of the new Esphigmenou Monastery also tell us this about Elder Nektarios, which they heard from Papa-Anastasi of the Cell of St. John the Forerunner:

"The elder Nektarios is a monk who lives in a Cell near Karyes. He is old, over 80. Father Christoforos is also with him, who is approximately the same age. They have a tractor with a coach to get to Karyes to make their commissions.

Every Sunday morning (4:00 AM) they go to Protaton, the main church of the Holy Mountain, to attend services, because both are simple monks. I met them one Sunday morning arriving by foot.

'What's going on Elder? Did the tractor break down?'

And I received the following reply:

'Tractor? With the tractor to the church? Never! Why the Angel counts even the footsteps which you make in order to attend services.'

How would I answer him now?"