St. Gregory Palamas and the Second Sunday of Great Lent 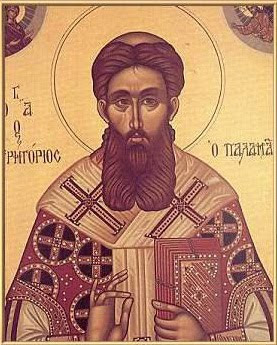 By Sergei V. Bulgakov
The Holy Church calls the second Sunday of Great Lent the Sunday of the Light-Creating Fasts. In its Divine services, in line with the destruction of the sinful condition of man, it is descriptively and touchingly represented in the church hymns, which explains the Gospel parable about the Prodigal son, and praises the fast as a means to the beneficial inner light, and posits in this glorification a new impulse for the ascetic effort of the fast. The Orthodox teaching about fasting as a means for the beneficial inner light is opened with special power in the commemoration on this Sunday of St. Gregory Palamas, Archbishop of Thessalonica and Wonderworker (see Nov. 14).

St. Gregory is known as the one who exposed the heresy of Barlaam, the Calabrian monk, who rejected the Orthodox teaching about the blessed light, which illuminates the internal person sometimes openly visible (as for example on Tabor and Sinai), and who did not admit the possibility to achieve this inner light through both prayer and fasting and other individual efforts. At the Council in Constantinople called in 1341 concerning this heresy, Barlaam, his disciple Akindynos, and their other accomplices were condemned for this false teaching. And during the subsequent time of his life St. Gregory zealously struggled for Orthodoxy, "not once", but "many times many" through his inspired speeches and writings denying the teachings and compositions of the evil followers of Akindynos and Barlaam.

For this ascetic effort for the benefit of the Holy Church, and also for the confession and witness for the Faith and Christ's flock, for the sanctity of the strict ascetic life and the deep edification for all ascetics through his works, St. Gregory is also glorified in the service on this day by the Holy Church. Thus the Holy Church, celebrating on the previous Sunday the triumph of Orthodoxy over all heresies, on the present Sunday celebrates the victory of Orthodox ascetic teachings over all false doctrines opposing it. The first celebration is in general for all Orthodox Christians; the second is for the use of ascetics, the monks.

Patriarch Philotheus of Constantinople composed the church service in honor of the originator of this latter celebration, for St. Gregory. In it St. Gregory is also glorified, as "the labor of theology, the flaming mouthpiece of grace, the honorable vessel of the Spirit, the unshakable pillar of the church, the great adornment of the universe", "the sword and arrows for the slanderers" that broke, "the pride of Barlaamites, and any heretical power", "like the web of spiders" he brushed away, "the preacher of the divine light, the initiate of the heavenly mysteries of the Trinity", "the healer of human infirmities", "the most holy father, the good shepherd", "you gave your soul for your sheep", "the firm sufferer and faster", "the advocate of the pious, and the opponent of the impious, the fervent defender of the faith, the great guide and teacher", "the adornment of monastic life, glorified in action and contemplation".

Apolytikion in Plagal of the Fourth Tone
O light of Orthodoxy, teacher of the Church, its confirmation. O ideal of monks and invincible champion of theologians. O wonderworking Gregory, glory of Thessalonica and preacher of grace. Always pray to save our souls.

Kontakion in the Fourth Tone
Now is the time for action. Judgment is at the doors. So let us rise and fast, offering alms with tears of compunction and crying: "Our sins are more in number than the sands of the sea; but forgive us, O Creator of all, so that we may receive the incorruptible crowns."