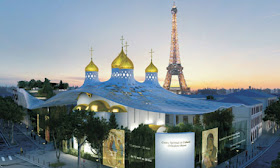 Cathedral with five onion domes to be erected next to Eiffel Tower will include cultural centre and public garden.

On the banks of the river Seine, Gustave Eiffel's iron tower, the symbol of France, juts high above the 19th-century Haussmann buildings and the trees of the Champ de Mars park that surround it.

But all this is about to change if the Russians have their way.

Moscow has unveiled plans to build a large Orthodox cathedral complete with five golden onion domes next to the Eiffel Tower. The building on the sought-after site will include a cultural centre and public garden, and was agreed directly by the French president, Nicolas Sarkozy, and his Russian counterpart, Dmitri Medvedev.

Architects' drawings show the domes sitting on an undulating roof of glass panels, with the tower in the background.

At 27 metres from the top of the highest dome to the ground, the cathedral is unlikely to detract from a structure that rises to 324 metres. City authorities say they will need to be sure it "fits into its surroundings and is built to last" before giving their approval for the building.

The winning design was unveiled on Friday after an international competition won by a Franco-Russian company.

When Moscow bought the site, formerly the HQ of the French weather service, last year, it was a diplomatic coup as at least two other countries were vying for the land. However, Le Nouvel Observateur magazine reported French concerns that it could be used as a front for spying as it is near a diplomatic complex.

Russian officials in Paris said work on the project was planned to start in 2012 and was likely to cost about €34.5m (£30.1m). Moscow has already paid around £60 million for the site.

"We wanted to find a combination of Orthodox tradition and contemporary architecture to stand out in the heart of Paris," said a spokesman for the church.

For other proposed designs for the church, see here.
John at 8:10:00 AM
Share
‹
›
Home
View web version