Thousands Gather in Georgia for Svetistkholoba 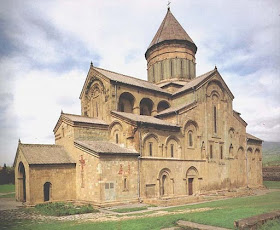 Thousands of believers crowded the narrow streets of the historic town of Mtskheta on Thursday to celebrate “Svetistkholoba,” the national Georgian holiday on October 14, and to commemorate the 1700th anniversary of the Svetistkhoveli Cathedral.

Throughout the day, visitors, as well as Georgian President Mikheil Saakashvili, attended religious services and watched traditional Georgian dances and concerts. In the morning, Catholicos-Patriarch of all Georgians Ilia II held a service at 10.00 a.m. in the cathedral.

Despite the occasional rain shower, the entire town bustled with activity. Street vendors sold food and souvenirs, from watermelons to papakha, a type of traditional woolen hat. Within the town, children paraded in their national Georgian costumes. Young boys wore the chokha, or a black tunic with bandoliers stitched in vertical rows on both sides of the chest, over black pants and black leather boots. The chokha is further decorated with a thin leather belt around the waist which holds a small dagger in its sheath. Young girls, on the other hand, wore the khevsuruli dress, another traditional costume which consists of a finely embroidered crimson dress and a matching head covering.

Svetistkholoba is considered to be one of the most important religious festivals in Georgia, while the small town of Mtskheta and its cathedral are one of the main religious centers in the nation. For many Orthodox Christians, the town and the church represent the cradle of Christianity. “Mtskheta is like the second Jerusalem,” said Tamuna Apakidze, who participated in the festival together with her family. “It’s the second place from where Christianity started,” she said.

According to tradition, Svetistkhoveli Cathedral is a shrine built upon the robe worn by Christ during his crucifixion, which was brought to Georgia by an Mtskheta Jew called Elioz. When Elioz brought the robe back to his home, his sister Sidonia died in a passion of faith clutching the garment in her hands. Thus the early Christian woman and the bloodied robe are said to have been buried together.

About three centuries after Sidonia’s death, however, when the entire nation was converted to Christianity, King Mirian planned to build the first church at Mstkheta. According to legend, the first wooden pillar which was designed to support the building could not be moved in any manner. But when St. Nino prayed next to the column, the wooden balk moved of its own accord and placed itself over the unmarked grave of Sidonia. Thus, the name “Svetistkhoveli” signifies “Life-Giving Column.”

Still today, visitors reunite every year to pray in the church where the miracle of the moving column occurred. The Cathedral of Mtskheta was in fact so packed that many faithful had to watch the ceremony from screens outside the building. Apakidze, who attends Svetistkholoba almost every October, said that big crowds were not a surprise. As the two main roads to the town have gradually become more accessible, more visitors are able to visit the town.

Fifteen-year-old Nini Grigolia, who was also at the festival, underlined the religious significance of the event. “It is a big day and everyone should go [to Mtskheta] to pray,” she said. Like many other visitors, she also said she enjoyed the beauty of the town.

Mtskheta itself, which is about 20 km from Tbilisi along the main highway, is indeed beautiful. The village and its medieval churches lie among the rugged mountains of the Caucasus and are surrounded by woodland and shrubs. To the east of Mtskheta, overlooking the valley below lies Jvari church, one of the holiest places in Georgia. Built in the 6th century, the building appears to have grown out of the cliff and can be seen from miles away. Though its interior is rather simple, the view over Mtskheta and the converging Mtkvari and Aragvi rivers is spectacular. Some of the walls of the church lie in ruins and overlook the craggy, windswept cliffs of the Caucasus.

Even for tourists and visitors from abroad, the combination of ancient traditions, of medieval Georgian architecture, and of the stunning views from Mtskheta and from Jvari help to create an almost mystical atmosphere. But for Georgian citizens the festival is much more than that.

Notwithstanding the crowds and the sometimes dubious weather, Apakidze says that October 14 is very important to her and her family. Though sometimes an entire year may pass without visiting Mtskheta, she says she always finds time to attend Svetistkholoba.

“It’s part of our old tradition,” she says, referring to her family’s yearly pilgrimage to the church. “At some point it’s a part of all of us.”
John at 10:19:00 AM
Share
‹
›
Home
View web version