The Occult Origins of the Photocopy Machine 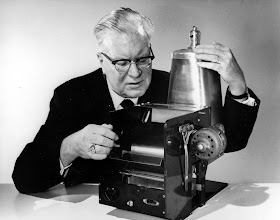 When one studies the origins of much of modern technology, one inevitable comes across some sort of spirit guidance leading the inventor towards their "great idea". Medical scientist Andrija Puharich, holder of more than 50 patents, gave his opinion about these strange inspirations:

"I am personally convinced that superior beings from other spaces and other times have initiated a renewed dialogue with humanity. While I do not doubt [their existence] ... I do not know what their goals are with respect to humankind." [Andrija Puharich, Uri: A Journal of the Mystery of Uri Geller (New York, 1975), p. 213.]

One of the most famous examples of this is Chester Carlson (1906-1968), inventor of the Xerox photocopying process, who received guidance for his invention from the spirit world. By the fall of 1938, Carlson's wife had convinced him that his experiments needed to be conducted elsewhere. He rented a room on the second floor of a house owned by his mother-in-law at 32-05 37th Street in Astoria, Queens. He hired an assistant, Otto Kornei, an out-of-work Austrian physicist. Chester Carlson devoted long hours to meditation at the behest of his wife in order to develop his psychic abilities and converse with the other side. He thoroughly believed that he received the knowledge necessary to create his breakthrough photocopying method from the spirit realm! On October 6, 1942, the Patent Office issued Carlson's patent on electrophotography. The home of Doris and Chester Carlson in Rochester, NY was known as a Zen meditation center and many would daily gather there to meditate. In June 1966 Philip Kapleau Roshi founded the Rochester Zen Center with the support of the Carlson's. After he became wealthy from xeroxing, Carlson donated significant sums for paranormal research to Duke University’s Parapsychology Laboratory and the American Society for Psychical Research (for which he served as a trustee).

In his essay "Half a Career with the Paranormal", researcher Ian Stevenson describes Carlson's philanthropic style. According to Stevenson, Carlson's wife, Dorris, had some skill at extrasensory perception, and convinced Carlson to help support Stevenson's research. Carlson not only made annual donations to the University of Virginia to fund Stevenson's work, but in 1964 he made a particularly large donation that helped fund one of the first endowed chairs at the University. Stevenson was the first incumbent of this chair. Although Carlson insisted on anonymous donations, wrote Stevenson, he was unusual in that he closely followed the details of the research, maintaining contact with Stevenson. "He rarely made suggestions, but what he said always deserved attention," wrote Stevenson.
John at 8:41:00 AM
Share
‹
›
Home
View web version