Saint Lucian the Hieromartyr of Antioch

Lucian (or Loukianos) was born of noble parents in the Syrian city of Samosata. In his youth, he acquired a very broad education, both secular and spiritual. He was a man distinguished in learning, as well as in the austerity of his ascetic life.

Having distributed his goods to the poor, Lucian supported himself by compiling instructive works, and thus fed himself by the work of his hands. He performed a great service to the Church in that he corrected many Hebrew texts of Holy Scripture (that heretics, in accordance with their own false teaching, had distorted). Because of his learning and spirituality, he was ordained a presbyter in Antioch.

During Maximian's persecution, when St. Anthimus of Nicomedia and St. Peter of Alexandria were tortured, St. Lucian was on the list of those the emperor wanted to kill. Lucian fled the city and hid, but an envious heretical priest, Pancratius, reported him.

The persecution was horrible and not even young children were spared. Two boys who did not want to eat food sacrificed to idols were thrown into a boiling bath, where in torments they gave up their holy souls to God. A disciple of Lucian named Pelagia (October 8) preserved her virginal purity from dissolute attackers by praying to God on her roof-top: she gave up her soul to Him, and her body fell from the roof.

Lucian was brought to Nicomedia before the emperor. Along the way, his counsels converted forty soldiers to the Christian Faith, and all died a martyr's death. Following interrogation and flogging, St. Lucian was cast into prison where he suffered starvation.

St. John Chrysostom writes of St. Lucian: "He scorned hunger: let us also scorn luxury and destroy the power of the stomach that we may, when the time that requires such courage comes for us, be prepared in advance by the help of a lesser ascesis, to show ourselves glorious at the time of battle."

He received Holy Communion in prison on the Feast of Theophany, and on the following day rendered his soul to God. St. Lucian suffered on January 7, 311. 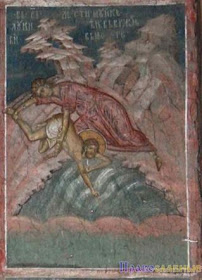 Reflection
The saints of God place great importance on receiving Holy Communion before their death. Even though they were sacrificing their lives for Christ the Lord and washing away all their sins by the blood of martyrdom, the martyrs longingly received the Holy Mysteries whenever it was possible.

St. Lucian was in prison with several of his disciples and other Christians. On the eve of Theophany, Lucian longed, on such a great Christian feast, to partake of the Body and Blood of Christ, for he knew that his death was imminent. Seeing the sincere desire of His sufferer, God Almighty arranged that some Christians pass bread and wine into the prison.

When the Feast of Theophany dawned, Lucian called all the Christian prisoners to stand in a circle around him and said to them: "Surround me and be the Church." He had no table, chair, stone or wood in the prison upon which to celebrate the Divine Liturgy.

"Holy Father, where shall we place the bread and wine?" they asked Lucian.

He lay down in their midst and said: "Place them on my chest, let it be a living altar for the Living God!"

And thus the Liturgy was celebrated correctly and prayerfully on the chest of the martyr, and all received Holy Communion.


HYMN OF PRAISE:
The Venerable Martyr Lucian
Lucian the most wise ascetic and scribe
Boldly walked on the path of Christ.
Against heretics and idolatrous darkness
Lucian the victor waged a bitter struggle.
Planted firmly on the foundation of the Most-holy Trinity -
The Father without beginning, with the Spirit and the Son -
Lucian glorified God in word and deed,
And he confirmed this by his innocent blood.
Savage Rome collapsed, the heresies died;
Works immoral and shameful perished;
The Church raised martyrs up to heaven;
And the Church, great and glorious, outlived all.
This is the Kingdom of saints, the Kingdom without end
That Daniel foretold and Christ founded -
O desired Kingdom, of earthly origin,
With golden domes atop the heavenly roofs!
And holy Lucian, a builder of that Kingdom,
Labored much, and gave all for it.
He now gloriously reigns beside his Jesus,
Borne by God to the angelic flock. 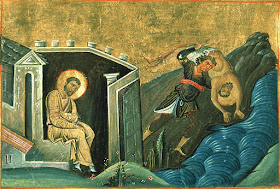 Notes On the Feast and Iconography of St. Lucian
St Lucian was originally commemorated on January 7, the day of his death. Later, when the celebration of the Synaxis of St John the Baptist was appointed for this day, the feast of St Lucian was transferred to October 15. The October date may be associated with the dedication of a church which was built in Antioch by St Helen (May 21) over St Lucian's holy relics.

It may be that the Russians thought of St Lucian as a bishop because of his importance to the Church, and so that is how they depicted him. Similarly, St Haralambos (February 10) is depicted as a priest in Greek icons, and as a bishop in Russian icons.

Read also: The Orthodoxy of Lucian of Antioch

Apolytikion in the Fourth Tone
Thy Martyr Loukianos, O Lord, in his courageous contest for Thee received the prize of the crowns of incorruption and life from Thee, our immortal God. For since he possessed Thy strength, he cast down the tyrants and wholly destroyed the demons' strengthless presumption. O Christ God, by his prayers, save our souls, since Thou art merciful.

Apolytikion in the Third Tone
Radiant with the Spirit, You taught true knowledge of the true faith; A trainer of martyrs, O Loukianos, You were glorified in contest. Intercede with Christ our God that he may grant us great mercy!

Kontakion in the Second Tone
We all gloriously acclaim thee with hymns, O Loukianos, thou most brilliant luminary, who wast first illustrious in asceticism and then shonest forth in contest: Intercede unceasingly for us all.
John at 9:19:00 AM
Share
‹
›
Home
View web version