Indirect Legal Recognition of the Ecumenical Patriarchate from Turkey 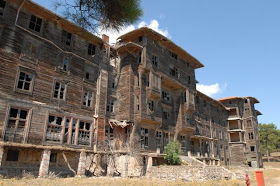 The Ecumenical Patriarchate of Constantinople is in front of a big decision for indirect legal recognition of the Patriarchate from the Turkish state.

The General Assembly of the General Directorate of Vakoufia of our neighbour has decided to return to the Patriarchate the orphanage of the Prince's Islands.

Thus, the Ecumenical Patriarchate is expected to be recorded soon in the Turkish Land Registry as owner of the orphanage and Turkey will be forced to implicitly recognize its legal existence within the country, which was avoided for decades.

Bishops of the Phanar didn't hide yesterday their optimism and they pointed out that: "This decision allows the recognition of a legal status to the Patriarchate, which Turkey did not accept until today."

The Orphanage of the Prince's Islands has been given to the Patriarchate by the European Court of Human Rights and the Turkish government was then forced to implement this decision and, despite the thorny political issue, to comply to the European standards.

As reported in the newspaper Haber Turk, "Thus, because of the cases that have been won to the ECHR, for the first time a decision is made to transfer ownership to a religious community led by a religious official", namely the Patriarch.

The issue was examined by a Turkish court in front of which the General Directorate of Vakoufia abdicated from the claim. The court, as said, recognized the right of the Patriarchate and is expected soon to issue the decision and sent it to the Phanar.

The Ecumenical Patriarch expects, as reported by his colleagues, the court's decision to be issued and published in order to evaluate the newly created situation.

At the same time, the Turkish Ministry of Interior sent the documents giving Turkish citizenship to 14 Bishops who until now are Greek, American and other EU countries citizens.

This resolves the serious problem of the succession of the Ecumenical Patriarch, as the Turkish law requires that he must have Turkish nationality.

These are the bishops who were invited several months ago to submit applications. It must be noted that from the 15 bishops who had submitted their papers only one was excluded, Metropolitan Michael of Austria, for the exclusion of which the Turkish authorities invoke legal obstacles, probably because he has an Austrian diplomatic passport, although he is one of the most respected officials of the Orthodox Church.