Part of Relics of St. Symeon the God-Receiver Given to Jerusalem Patriarchate From Croatia 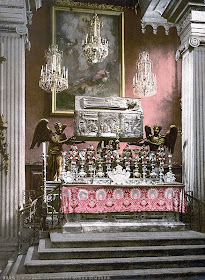 On October 7th 2010, during the Solemn Vespers of the Feast of St. Symeon the God-Receiver, in the Sanctuary of St. Symeon in Zadar, Croatia, a particle of the relic of the Saint's preserved body was solemnly handed over to the representatives of the Greek Orthodox Patriarchate of Jerusalem.

The mummified body of Symeon the God-Receiver or the Righteous, the temple priest who held the Lord Jesus in his hands at His presentation in the Temple of Jerusalem (Luke 2, 25-35), has been kept and venerated in the city of Zadar for more than 800 years. It was first transferred from Jerusalem to Constantinople and then in the year 1273 from there it was destined to be taken to Venice. Apparently a storm in the Adriatic sea, in the surroundings of Zadar, interrupted the transfer and the body remained in Zadar. It was first deposed in the church of St. Mary Major and later, in 1632, transferred to the Church of St. Stephen that until this day became the Sanctuary of St. Symeon the God-Receiver. In 1380 the Hungarian-Croatian Queen Elisabeth Kotromanić commissioned a silver and golden chest to be made for the Saint's body. It is a masterpiece of medieval art under protection of UNESCO, over 350 kilograms of weight, ornated with carvings commemorating historical and biblical events. St. Symeon is one of the patrons of Zadar, together with St. Anastasia and St. Chrysogon, and his feast is solemnly celebrated on October 8 every year.

The late Archbishop Ivan Prenđa of Zadar, during a pilgrimage to the Holy Land in 2007, met with His Beatitude Theophilus III, Greek Orthodox Patriarch of Jerusalem, who informed the Archbishop that there is a monastery of St. Symeon the God-Receiver in Jerusalem called "Katamon" where the empty tomb of the Saint is venerated. They agreed that the Archdiocese of Zadar would hand over a piece of the body of the Saint to the Patriarchate of Jerusalem to be kept and venerated in the Church of the Katamon Monastery of St. Symeon. Arrangements were made with the Congregation of Divine Worship and Cult of Saints in Rome and a piece of the Saint's body was removed (5 x 2.50 cm) and put in a small silver reliquary to be handed over to the Patriarchate of Jerusalem. The reliquary contains the inscription: Ex corporis Sancti Simeoni Iusti Zadar 7. octobris 2010. The handing over was performed by Msgr. Prenđa's successor, the Archbishop of Zadar Msgr. Dr. Želimir Puljić, who handed over the relics to His Eminence Archbishop Theophylactos of Jordan and Archimandrite Macarios of Qatar, as representatives of the Patriarchate of Jerusalem, during a solemn celebration of Vespers in the Saint's church in Zadar in the presence of the clergy and the faithful of Zadar. The document of authenticity was read in Latin and Croatian and presented to be seen by all those present. During Vespers, the short reading from the Epistle to the Hebrews was chanted in Greek by Archimandrite Macarios and also the Troparion and Kontakion to St. Symeon. At the beginning a sign of peace was exchanged by the Archbishops Puljić and Theophylactos. 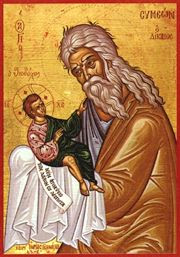 Archbishop Želimir Puljić emphasized in his homily the great ecumenical importance of this occasion. "The Ecumenical Treaty signed in Strasbourg in 2001 states that Christians and Christian Churches should go towards each other, to act and pray together. Ecumenism lives by this mutual walk. Even so the painful fact that Christians still do not celebrate the Eucharist in communion remains, nevertheless different ecumenical services, praises and prayers, especially the 'Our Father', are a great sign of our mutual connection... Christians should never get tired of spreading love, tolerance and forgiveness. This is especially the call of Catholics and Orthodox because they are bound together by the same holy books and traditions, kerygma and liturgy, and the magisterium of the first Seven Ecumenical Councils."

Archbishop Theophylactos, at the end of Vespers, expressed the joy and gratitude of the church of Jerusalem on this historical occasion. He said: "This is a great and significant occasion that will be inscripted in the history of the Church of Jerusalem with golden letters. You can only imagine the joy of the Christians of the Holy Land and all the pilgrims that visit the holy places from all over the world." They exclaimed – "Eis polla eti despota!" (Many years, Master!) to Archbishop Želimir at the end of his speech and then carried the reliquary through the church. During his meeting with Archbishop Puljić, Archbishop Theophylactos announced that the Holy Synod of the Patriarchate of Jerusalem invested the Archbishop of Zadar with the Order of the Holy Sepulchre as a sign of gratitude for the handing over of the relics to the Monastery Church of St. Symeon in Jerusalem.

Press Release of the Archdiocese of Zadar