The Eucharistic Miracle of Lanciano 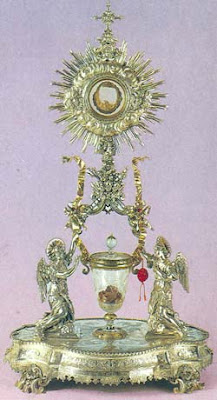 In the city of Lanciano, Italy, around A.D. 700, a Basilian monk and priest were assigned to celebrate the Divine Liturgy in the small Church of St. Legontian. Celebrating in Greek and using leavened bread,* that monk had doubts about the real presence of Jesus Christ in the Holy Eucharist.

During the Divine Liturgy, when he said the Words of Consecration ("This is my body"; "This is my blood".), with doubt in his soul, the priest saw the bread change into living flesh and the wine change into live blood, which coagulated into five globules, irregular and differing in shape and size (this number corresponds to the number of wounds Christ suffered on the cross: one in each hand and foot from the nails, and the wound from the centurion's spear).

Since 1574, various ecclesiastical investigations of varying degrees of detail have been conducted upon the miracle. The first appears to consist of a weighing, in which each different globule though varying in size, all each weigh the same and always produced the same weight no matter what the amount of these globules was. Thus all of them put together was the equivalent to any one of them or any three or any four all equaled the same weight no matter what combination. Also an examination in 1971 conducted by Professor Doctor Odoardo Linoli which were confirmed by Dr. Bertelli. The flesh was found to be human striated muscular tissue of the myocardium (the heart wall), type AB, and to be absolutely free of any agents used for preserving flesh. The blood at Lanciano has divided into five irregularly shaped pellets. At scientific examinations conducted in 1971 these pellets were found to be human blood, type AB ("the universal receiver"), with proteins normally fractionated and present in the same percentage ratio as those in normal fresh blood.

This most recent examination was performed by Professor Odoardo Linoli, Professor in Anatomy and Pathological Histology and in Chemistry and Clinical Microscopy, and Professor Ruggero Bertelli of the University of Siena. The report was published in Quaderni Sclavo di Diagnostica Clinica e di Laboratori in 1971.

The following conclusions were drawn by Odoardo Linoli:

- The flesh is real flesh and the blood is real blood.

- The flesh and the blood belong to the human species.

- The flesh consists of the muscular tissue of the heart.

- In the flesh we see present in section: the myocardium, the endocardium, the vagus nerve and also the left ventricle of the heart for the large thickness of the myocardium. The flesh is a heart complete in its essential structure.

- The flesh and the blood have the same blood type, AB.

- In the blood there were found proteins in the same normal proportions (percentage-wise) as are found in the sero-proteic make-up of fresh normal blood.

- In the blood there were also found these minerals: chlorides, phosphorus, magnesium, potassium, sodium and calcium.

The flesh and blood of the alleged miracle can still be seen today. The flesh, is fibrous and light brown in colour, and becomes rose-coloured when lighted from the back. The blood consists of five coagulated globules and has an earthly colour resembling the yellow of ochre.

* The piece today is deceptively stretched out to appear as if it was unleavened according to later Catholic practice.

The Eucharistic Miracle of Lanciano, Italy

"If after the consecration of the bread & wine a miracle is revealed, ie, if the bread manifests the appearance of a child or the wine the appearance of blood, and if in a short time this appearance does not change, ie, if they do not appear again under the form of bread & wine, but if they remain thus without change, then let the priest not take communion because it is not the Body & Blood of Christ, but a miracle from God manifest only because of the lack of faith or some other reason."


The instruction goes on to say that if the Body assumes another appearance then the priest must make another Lamb as he did at Proskomedia. He then resumes the Liturgy with the prayer "With these blessed hosts..." which is the prayer said at the Anaphora while the choir sings, "Holy, holy, holy..." If the Blood changes appearance, then he must pour new wine into the chalice. The purpose of this is so the faithful may still receive the Body & Blood of Christ at the Liturgy.