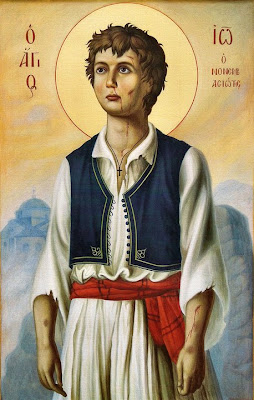 
Verses
You longed to keep the laws of the time of the fast,
Sacrificing your life O blessed John.
Saint John was born in 1758 near the city of Monemvasia. His father was a priest from Geraki, and his mother was from the neighboring village of Gouves. It was in Gouves that the father of John was assigned as a priest, and there John was born. From a young age John tried to emulate his father by helping him work in the church. He was known for his exemplary behavior, and referred to by other children as the "priest's son".

In the year 1770 the army of the Albanian Hatzi Osman defeated the Greek resistance, and arriving in Monemvasia they killed John's father and enslaved both him and his mother. They were taken to Larissa, where they were sold-off two or three times separately. 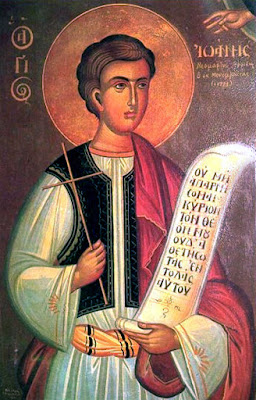 After two years they were bought by the same man, a Turkish landowner. This Turk did not have any children, and seeing John's talents (who was exceptionally smart for his age, obedient and a hard worker) he thought, along with his wife, to make John their God-child. Therefore, every day they tried to convince him to leave the faith of the Christians and become a Turk. Initially they tried to convince him with flattery and promises, but later they used terrible tortures to try to overcome the steadfastness of John (who was only 15 years old), who kept his Christian faith unwavering.

One day his master, tired of trying to convince him to convert, in anger led him to the courtyard of the mosque. Many Muslims were gathered there, and with blows and terrible threats they urged him to convert and become a Turk. John's answer, however, was clear: "I am not a Turk, I am a Christian and I want to die as a Christian." 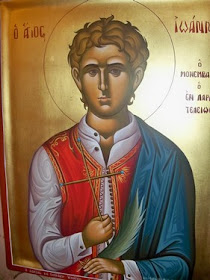 Besides this, the Turk and his wife tried every day with magic and evil seductions to get the Saint to lose his mind and give in to carnal desires and then to become a Turk. But John, having God inside of him, remained pure from everything. Divine Grace protected him from all the diabolical devices of the Turk's wife.

Soon came the fifteen days of fasting before the Dormition of the Theotokos. The Turk realized that John did not want to spoil the fast, so he locked him up in a barn. He kept him there for the entire fifteen days and hung him up, lit fire to the straw to cause smoke, and hit him with a sword, all the while trying to make him eat and to spoil the fast. But Saint John did not even taste the food, but prayed to the Virgin Mary to help him not to break the fast, preferring to be killed than to spoil his fasting. 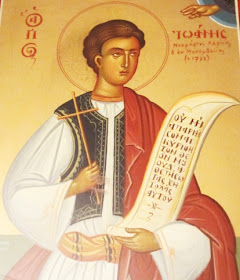 The master, seeing that he remained unconvinced, left him without food for two and three days. His mother, on seeing him deadened by the tortures and the fasting, tried to convince him to give in, saying: "Eat from these dishes my son so you won't die, and God and the Panagia will forgive you, because they're not your wishes, for you are doing them out of necessity. Console me, your poor and upset mother, and don't seek death and leave me alone in this slavery and exile."

To his mother's pleas, John replied: "Why are you doing this mother, and why are you crying? Why don't you emulate the Patriarch Abraham, who for the love of God wanted to sacrifice his only son, but you only cry and weep. I am a priest's son and I should be keeping the laws and customs of our Church more than the sons of lay-people, for when we don't keep the small things [of the faith], how can we keep the large things?"

Soon after this response the furious Turk, on 19 October 1773, gave him a fatal stab in the heart. After two days Saint John died and received the crown of martyrdom.

His memory is honored by our Church on the 21st of October. His skull and portions of his hand and feet are located at the Zermbitsa Monastery in Sparta, and other portions of his relics are in the Church of the Forty Martyrs in Larissa and Voulkanou Monastery in Messenia.

Apolytikion in the Third Tone
Divine offspring of Monemvasia, who grew and bore the fruit of faith by grace, O John; who kept the commandments of the fathers, and put to shame those of Hagar by your struggle. O glorious Martyr, entreat Christ God to grant to us the great mercy.