The Spirits of Diveyevo Nuns Photographed? 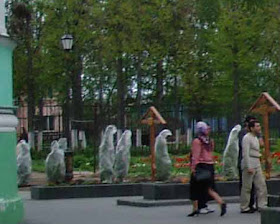 Sarov Resident Believes He Took Pictures Of Nuns' Souls
June 5, 2008
Interfax
A resident of Sarov was very surprised when he looked at the photos he had made during his pilgrimage to St. Seraphim Monastery in Diveyevo as besides his relatives he saw strange figures that were not present when he took the pictures.

The photos conveyed to Interfax-Religion on Thursday show silhouettes dressed in monastic robes and hoods going to the canal of the Mother of God. The canal near the Trinity Cathedral was dug by the first nuns of the monastery on the instruction of St. Seraphim of Sarov as, according to him, he saw the Mother of God passing that way.

The photo's author was impressed and came back to Diveyevo for studying the pictured place behind the altar of the Trinity Cathedral. According to him and other numerous witnesses and nuns there is only an untouched green lawn and no path there.

Many miracles and mysterious signs are connected with St. Seraphim Monastery and its founder St. Seraphim. According to the pilgrims, miracles often take place today.

Many of the miracles have happened in the canal of the Mother of God. St. Seraphim believed in the holiness of this place and instructed nuns to go along the canal every day saying the "Rejoce, Mother of God..." 150 times. He stressed: "Whoever goes along the canal and says a hundred and fifty prayers to Our Lady, will have everything here: Athos, Jerusalem, Kiev!"

The elder's covenant has been fulfilled in the monastery up to day.

Read also: The Holy Canal of the Theotokos at Diveyevo Monastery
John at 1:11:00 AM
Share
‹
›
Home
View web version