The Horrific Martyrdom of Hieromartyr Theodore of Vrsha 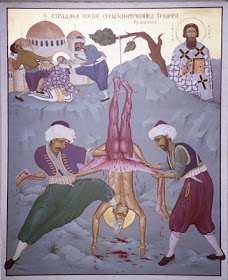 Our father among the saints Hieromartyr Teodor or Theodore (Nestorović) of Vršac or Vrsha (Свети свештеномученик Теодор (Несторовић) Вршачки) was a Serbian Orthodox bishop of Vršac in the sixteenth century. His feast day is May 16/29.

During the Austro-Turkish War (1593-1606), many Serbians suffered under the Turkish Islamic warriors. The Serbs in Banat decided to protect their families from these Turkish troops and asked their bishop, Teodor, to lead them. He joined the rebellion against the Turks in 1593. The Serbs liberated some towns but in the end were defeated. Bishop Teodor, along with a large group of people, left for Transylvania. The Turks then promised that they would stop killing innocent people if Teodor were to return. When he did, he was seized in 1595 and then killed in a terrible fashion: his skin was ripped off.

Kontakion in Tone 8
Let God be praised in the fields and meadows, on the green mountain tops and in the valleys below, on the rushing rivers and in dark caves, since every place has been watered by the innocent and holy blood of many Serbian Martyrs: worthy stewards, brave soldiers, young boys and children and chaste virgins; let God be praised and let everyone keep silent, for the Lord of all rules the world.
John at 11:25:00 PM
Share
‹
›
Home
View web version