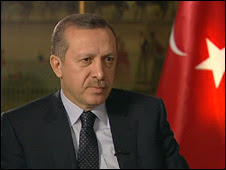 Turkey's prime minister has threatened to deport 100,000 Armenian migrants, amid renewed tensions over Turkish mass killings of Armenians in World War I.

Recent resolutions in the US and Sweden have called the killings "genocide".

Recep Tayyip Erdogan told the BBC that of 170,000 Armenians living in Turkey "70,000 are Turkish citizens".

Thousands of Armenians, many of them women, work illegally in Turkey. Most do low-skilled jobs such as cleaning.

Mr Erdogan was speaking in an interview with the BBC's Turkish Service, in which he was asked about the recent votes by lawmakers in the US and Sweden.

The resolutions, recognising the mass killings of Armenians by Ottoman Turks as "genocide", were passed narrowly, and in both cases Turkey reacted angrily.

Armenian Prime Minister Tigran Sarkisian was quoted as telling parliament on Wednesday that Mr Erdogan's comments only reminded Armenians of the mass killings.

"These kinds of political statements do not help to improve relations between our two states," he said.

"When the Turkish prime minister allows himself to make such statements it immediately for us brings up memories of the events of 1915."

Diplomatic moves to normalise relations between Turkey and Armenia have faltered recently.

Hundreds of thousands of Armenians died in 1915, when they were deported en masse from eastern Anatolia by the Ottoman Empire. They were killed by troops or died from starvation and disease.

Armenia says up to 1.5 million Armenians were killed, but Turkey says the figure is no more than one-third of that and that many Turks died as well.

Turkey accepts that atrocities were committed but argues they were part of the war and that there was no systematic attempt to destroy the Christian Armenian people.

Armenia wants Turkey to recognise the killings as an act of genocide, but successive Turkish governments have refused to do so.

Armenians have campaigned for the killings to be recognised internationally as genocide - and more than 20 countries have done so.
John at 7:21:00 AM
Share
‹
›
Home
View web version