The Friendship of Saint Nektarios and Elder Daniel of Katounakia 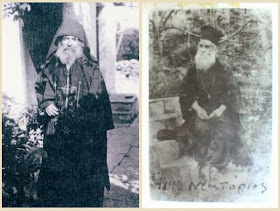 "With the innocent man thou art innocent, with the holy thou art holy, with the elect thou art elect..." says the Psalmist.

Elder Daniel was a brother greatly beloved and esteemed by St. Nektarios. Their acquaintance had begun when the Saint visited the Holy Mountain, and their mutual correspondence and mutual help and prayer day by day forged it into a strong chain. Elder Daniel is one of the elect: an unknown saint close to the recognized Saint whose renown and glory has in our age won over the whole world.

St. Nektarios, being the slandered scapegoat of the ecclesiastical leadership of his time, found relief in the friendship of Elder Daniel. The Elder in turn received much support from the Saint in the construction of his hermitage and considered him a "builder and father and abbot of the holy community." Every so often he received copies of the Saint's books inscribed by his hand. The Christology*, the Know Thyself, the Pandects of Antioch, the Priest's Handbook, the Theotokarion, etc., have been preserved up to today in the Library of the Danielioi.

In his turn, the Hierarch was also helped by the Elder. In one of his letters he asks concerning his women's monastery in Aegina: "You would oblige us greatly if you would be pleased to write some spiritual word to the virgins for their encouragement. A dictated epistle by you on action and contemplation would be a strengthening for them in this living teaching, a true spiritual delight and support."

Elder Daniel, performing a work of obedience and love, responded with the "Epistle on Monastic Forms." In this letter he does not only deal in general and abstract terms with obedience, poverty, chastity, prayer, etc., but goes deeper:

... When a sister at the time of prayer smells any kind of fragrance, or sees an interior or exterior light, or the appearance of an Angel or Saint, or Christ, do not accept such a vision, whether they occurred during sleep or wakefulness, because by such fantasies the evil demon has lead many astray.

... If at any time by the envy of the demon there arises a scandal between two sisters, then much exertion is required that the one may forestall (the other) by means of silence, and cease the thoughtless justifications which the demon of accursed quarrels introduces, casting the blame upon herself (even if she has done no wrong), and saying to the other: 'Bless, forgive me for Christ's sake, for I spoke as a foolish one.' This, however, the younger one should do. But when the younger one appears perverse and does not keep in sight the (saying) 'Know Thyself', then let the other do it, as being the wiser, that she might gain the weaker one.... But never let the sun go down without a proper reconciliation.

Such were the counsels - the essence of his deep knowledge and rich experience in spiritual matters. But the newly-revealed Saint would also often support Elder Daniel. Particularly in one serious trial he was an angel of consolation. The events were as follows:

A respectable looking gentleman from the outside world travelled through the Holy Mountain gathering subscriptions for the Collected Works of St. John Chrysostom, which he said he was going to publish. Such a God-pleasing work deserved support, and Elder Daniel did everything he could to assist him. Despite his meagre finances, he did not hesitate to borrow fifty pounds from the Great Lavra and give them to him.

Much time passed, but he heard nothing about the publication of the works of St. Chrysostom. Later he learned that the irreproachable gentleman was a deceitful man who had now been uncovered. What a temptation this was! In his sorrow he wrote to St. Nektarios to tell him of his trouble. St. Nektarios sent him an answer worthy of a Saint, a letter unmatched in philosophical depth. In it he reasons in a masterly way that trials lead the soul to true philosophy, that all Christians are obliged to become "philosophers," and much more the lovers of this philosophy, namely monks. God sends trials, which our imperfection requires in order to reach perfection. Trials open our eyes and mind that they may see and think further, to the unseen and the eternal.

But it is better for us to follow this epistle from the beginning: 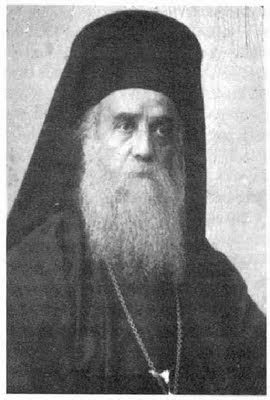 Holiest in Christ Fr. Daniel, I embrace your love as a brother.

Receiving your holy letter, I was grieved to read it and find that sorrow is disturbing your soul's peace. Truly what happened is grievous, but we know that all works together for good for those who love God. By the assurance of the Apostle, the truth of this apostolic saying possesses absolute authority as a divine word. Trusting in the divine love, I believe that I obtain great benefit from trials.

Your holy love knows that trials lead to perfection; no one who is untried is meritorious; no one who is untried is exalted above the earthly level, upon which stands and is supported the ladder of the virtues that reaches to heaven. For the lovers of God, trials become trainers, training the soul in philosophy. Christianity leads to the true philosophy, to which the Christian must hasten; for no one who is not a philosopher comes to the measure of perfection, which he must attain, without this. And if all Christians must become philosophers, so as to become perfect according to the commandment of the Lord, how much more those who are lovers of this consecrate themselves to it? If trials train one in philosophy, and philosophy leads to Christian perfection, then trials are necessary.

The trials that teach one philosophy also teach one patience; for patience is the close sister of philosophy; wherefore no philosopher is impatient, and no one who is impatient is a philosopher. Trials truly test the foundation stone of the virtues - patience, which leads to salvation; by which the philosopher Christian not only does not succumb to evil, but takes courage and endures and rejoices. Yes, truly he rejoices, since according to the Apostle Paul he even glories in afflictions, knowing that afflictions effect patience, patience effects experience, experience effects hope, and hope is not put to shame, for the love of God is poured out into his heart.

Trials, as the follower of true philosophy well knows, happen by divine economy, will, approval, in order that our minds may be aroused to more perfect understanding of the mystery surrounding us. The man who is not tested will be ignorant of the truth. Trials are an indisputable witness of (God's) love and compassion for man, wherefore also he must give thanks in everything. A man's imperfection calls for trials to perfect him; trials open the noetic eyes of the lovers of God to the light of truth, and make them shine and be able to see not only what is near but also what is far away. They make the nous able to understand not only what is comprehensible, but also what is above comprehension; and not only to understand, but also to know exactly, because in perfection there is full knowledge, for full knowledge leads on to perfection. There is therefore need that we be tested that we may be perfected. This is needful not only because, being born according to the image, we must also attain the likeness, but also because we bear the results of the ancestral inheritance. The powers of the soul are attacked and weakened, so that the soul must be stung with a goad to be aroused; and it needs heavenly light for clarity of mind. If, as you know, perfection consists in man created in the image of God to attain to the likeness of God, then this is to be found in the highest step of the spiritual ladder reaching heaven, which step a man must mount. But doesn't it not happen that as he climbs and steadily advances to the heights he is inherently inclined to the earthly, the trials of which are not lacking, while he does not reach to the desired end, towards which he hastens and for which his heart longs?

Brother in Christ, the trials to which, entirely by divine economy, you are submitted, will send you great spiritual profit. Informed by my heart, I say to you that today you are more perfect than you formerly were. Therefore I beg you: cease sorrowing, and glorify the Lord Who has mercy on you.

I am sending you the (volumes of) Chrysostom by freight to Daphne, in a box marked D.A., under your name.

Embracing you and your community with a brotherly greeting in Christ, I beg you to remember us also in your intercession before God.

I remain by necessity your brother in Christ,


When Elder Daniel received the Saint's letter, his sorrow was dispersed. The words of the Metropolitan of Pentapolis were not merely a human consolation, they were "spirit and life", because the Bishop spoke and wrote by the grace of Christ. At all times he held it an inviolable principle to confirm his words with deeds. He therefore made a package of thirteen massive volumes of St. Chrysostom (published in Venice, 1734-1741, Bernardi de Montfaucon) and sent it to Elder Daniel. This was as "dew from Hermon". This was a sea of true love, which did not hesitate to make yet bolder spiritual and material sacrifices. How could Elder Daniel express his happiness or thank the Lord?

The volumes of St. Chrysostom's work are preserved in the Library of the Danielioi, where they witness to the unity and harmony of two souls who now exult in "the union of eternal love" in heaven. 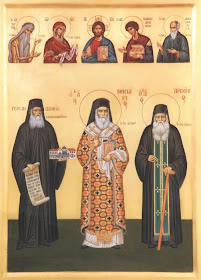 Another Letter of St. Nektarios to Elder Daniel

The following letter of St. Nektarios was also addressed to Elder Daniel, and the original copy is preserved in the Kalyva of the Danielioi:

From the Holy Women's Monastery of the All-Holy Trinity in Aegina, August 18, 1913.

Most Holy Brother in Christ Daniel, I embrace your holiness as a brother.

I take courage, on the basis of your holiness' love for us, to entrust a matter to your sure care, which I consider suitable for the accomplishment of a work of great interest to us.

It is known to you that we desire to purchase a cell on the Holy Mountain, in a level southern location, having a garden, water, and if possible also a church, because at the present time I have it in mind to install there one or two of my spiritual children, who wish to live the monastic life on the Holy Mountain. After some time, when I am released from the many cares which I have undertaken in our Monastery, I will come to the Holy Mountain for a while for spiritual refreshment.

Furthermore, I beg your holiness to take care to find also a good and virtuous Elder, who will undertake to guide our novice spiritual children, who stand in need of a good trainer to introduce them to the arena of contest and to support them by both his example and words in the spiritual struggle. The bearer of my present letter, Luke Kalantzis, will supply you orally with all related information.

Finishing, I embrace your brotherly love, and remain the suppliant before God,

P.S. By the bearer I am also sending you my two new works, the two volumes On Schism and my two studies on the Church and Holy Tradition.

* Concerning the gift of the Christology, St. Nektarios wrote to him: "I was slow to answer your most noble letter, because I also wanted to send you a little keepsake as a sign of love. As the smallest token I am sending you our enclosed photograph and one of our works, the sacred Christology, which treats of the divine character and work of our Savior Jesus Christ." (Letter from Aegina, Nov. 6, 1915)