The Holy Archangels and Docheiariou Monastery 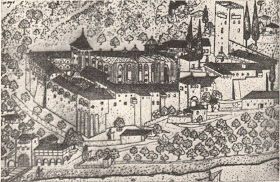 On November 9 we commemorate the builders of Docheiariou Monastery on Mount Athos, Saints Efthymios and Neophytos, as well as the great miracle of the Holy Archangels Michael and Gabriel which occurred early in the history of the monastery. Below are the details of this great miracle:

The Archangels Help the Fathers at Docheiariou Monastery

The Docheiariou Monastery is located on the southwest tip of the Athonite promontory, northwest of Xenophontos. Though the origins of the monastery are somewhat obscure, it was first established by Efthymios Docheiarios (the cellarer) in the tenth century.

The saint had a nephew, the patrician Nicholas, whose father had been a duke during the reigns of Emperor Nikephoros II Phokas (963-969) and John Tzimiskes (969-976). Since Nicholas' uncle was abbot of an Anthonite monastery, he loved to visit the elder and lavish gifts upon the monastery. At length, Nicholas forsook the world and the things of the world, and joined the brotherhood headed by his venerable uncle. In the holy tonsure, Nicholas was given the name Neophytos by Saint Efthymios. In time,the saint entrusted the holy Neophytos, as one superior in virtue, with the governance and concerns of the monastery. The holy Neophytos renovated, expanded, and improved the monastery. However, his fortune from the world had not sufficed to cover the expenses of iconography for the new and larger church. Nonetheless, our Savior hearkened to his prayer for this God-pleasing endeavor, in the following marvellous manner, during the reign of Emperor Nikephoros III Botaneiates (r. 1078-1081).

The Chalkidike peninsula of Longos is approximately sixty miles opposite the Holy Mountain. This is where Docheiariou Monastery had its metochion, that is, a monastery holding. Near the monastery's holding there was atop an ancient pillar the following inscription: "Whoever will strike my head will find much gold!" Needless to say, many cast stones at the top of the column, but no treasure was to be had. Yet the riddle meant the top of the shadow that was cast by the pillar - that is where the treasure was hidden. However, God, in His economy, desired to unravel this mystery at the proper time.

At the metochion, there was a lad of about twenty years of age, named Basil, who was paid a wage as a laborer. He, too, with many others, visited the column and wondered at its promise of gold. One day, as the sun was descending, the youth went to the column. He noted where the pillar cast its shadow and began to dig at that spot. Thereupon, he came upon a marble slab. Below the slab, he uncovered a copper vessel filled with gold coins. Upon beholding this enormous find, the youth was completely overcome; but he quickly covered up the spot and hastened to Abbot Neophytos.

Approaching the abbot, he declared, "Holy master, a tremendous amount of gold is buried at our metochion! Send me back with some of the monks that we might transport it here to the monastery." Saint Neophytos then dispatched three monks, who were seemingly pious, with the monastery boat. Thereupon, they went to the spot and took up the gold, its vessel, and the slab which concealed it. They proceeded to the shore and departed. 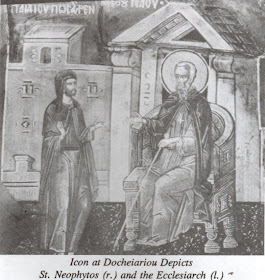 However, the monks were ill-intentioned. They were enticed by the treasure and plotted to keep it themselves. Therefore, they took up the slab and bound that honest young man to it from his neck. Then - alas! - they cast him into the depths of the sea.

Evening was drawing nigh. Upon being cast overboard, the lad invoked the aid of the holy archangels. Straightway, the bodiless host, Archangels Michael and Gabriel, appeared before him and, as eagles with golden wings, they caught him and took him from the depths of the sea. Then, in a moment, the young man found himself inside the monastery church at Docheiariou. Terror-stricken, he lay motionless in the church.

In the meantime, the three wayward monks divided the treasure among themselves. They hid their portions outside the monastery and then stayed by the dock till morning. 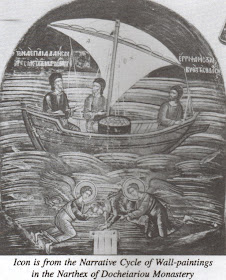 When the hour for Orthros approached, the caretaker of the lights and candles went about his obedience, so they might commence chanting the service. He found the young Basil in the church, but he thought he beheld a phantom. Therefore, he began to draw back, but then changed his mind and decided to approach, to take a better look at this spectacle. Not quite sure what he was gazing upon, he took to his heels, seeking the abbot. Going up to Saint Neophytos, he cried aloud, "My elder, there is a phantom in the church, and I cannot go inside!"

The abbot answered, "What dost thou fear? Make thy Cross and proceed courageously!" Meanwhile, the other brethren had assembled for the service. They, too, beheld the youth and hastened to Father Neophytos. The abbot then got up and went into the church with the ecclesiarch. As they entered the church, they clearly saw the youth. He was bound and asleep upon the marble slab that was tied to his neck. The abbot then tapped him with his staff to rouse him. The youth awoke, and said, "Tell me, O brothers, where am I? I thought I was in the sea where the monks had cast me overboard." Abbot Neophytos then questioned him, saying, "Dost thou not know where thou art? Behold, the monastery; behold, the Church of Docheiariou. Behold, I am Abbot Neophytos. Yet, tell us: How camest thou here?" The youth replied, "Leave me a space to come to myself." 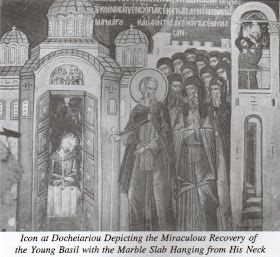 After a short time, he related to the brethren all he had suffered at the hands of the three monks. Abbot Neophytos then said, “Tarry here till the morning. We will chant the service until the three criminals come up from the dock to the monastery. Let them behold the miracle!"

Morning came, and the abbot ordered that the three monks ascend from the dock. As they stood before him, he addressed them, saying, "How goes your discovery, O fathers?" Then, in unison, they replied, "O elder of ours, the inscription played us false. The lad fooled us, and then, when we threatened him, he fled!" Abbot Neophytos then uttered, “Glory be to Thee, O God! Let us go into the church and thank God!"

Upon entering the church, when those three malefactors caught sight of the youth bound with the marble slab about his neck, from their astonishment, they stood speechless. The abbot then threatened them. Thereupon, the three men brought the treasure into the monastery. Straightway, Abbot Neophytos expelled them from the brotherhood. 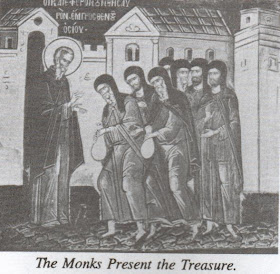 The youth Basil who desired to become a monk, was then tonsured and renamed Barnabas. At length, he succeeded the Elder Neophytos as abbot. Thus, the church was decorated with sacred icons and named in honor of the holy Archangels Michael and Gabriel.

The Finding of Water at Docheiariou

Docheiariou Monastery also has a holy fountain named after the Archangels Michael and Gabriel. A miracle brought into existence this well. In the fourteenth century, during the reign of Emperor Andronikos Palaiologos, the monks of the monastery were compelled to fetch water from a distance of three miles. This caused many hardships and even sickness for the brethren. Monk Theodoulos, a builder at the monastery, planned to lay large underground pipes to convey water. Then, on the eve before the work would commence, the two archangels, Michael and Gabriel, appeared to Theodoulos and said, "O man, why dost thou labor and exhaust the monastery in vain? Know this: water is inside the monastery." As Theodoulos listened, it seemed to him that he rose up and said to them, "I beseech you, show me where it is." Thereupon, they answered, " Come, and we will show thee." Then, the two archangels took him by the hands and brought him to a spot where, today, a well is located.

Arriving at the indicated site, they took up digging tools and began to work. Not much time passed before the archangels offered water to the monk. Theodoulos partook and found the water very sweet. Straightway, he awakened from sleep and called the brethren, saying, "In my sleep, this night, I beheld a vision wherein the two archangels came and showed me where water is located on the monastery grounds. Therefore, let us dig in that place they showed me!"

The brethren rallied and began digging. Forthwith, a vein of water sprung forth. The monks dug deeper, and drinkable water gushed forth. They glorified God and His archangels. The well exists to this day. The water is reputed to be sanctified; and those who drink with faith find healing from sickness.

These miracles, brethren, which we have recounted are but a few of the countless wonders performed by the archangels. We have recounted these few which sufficiently glorify God and His archangels. O angelic hosts who stand before the throne of God and ever hold chorus, O archangels, and angels, principalities, thrones, and dominions, six-winged seraphim, and divine and many-eyed cherubim, vessels of wisdom, authorities and powers most divine, pray to Christ that He grant our souls peace, great mercy, and His kingdom.

From the book The Lives of the Monastery Builders of the Holy Mountain Athos by Holy Apostles Convent. 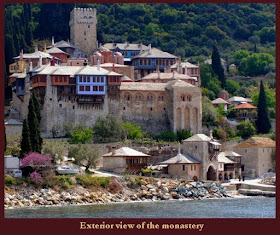 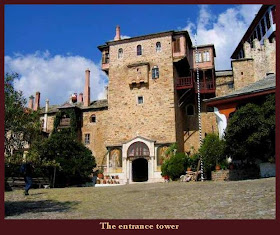 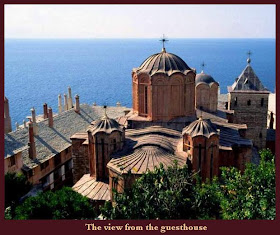