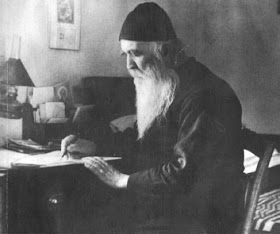 The following is taken from the autobiography of Elder Philotheos Zervakos regarding the final meeting he had with his spiritual father, Saint Nektarios:

I considered it my divine obligation and duty to see my spiritual father, St. Nektarios, before returning to the holy monastery of my repentance [in Paros]. Therefore, I went to see him at the Rizareios Theological School. However, I learned that he had resigned from his post and was now living in Aegina, so I went to Aegina. It was August now, and the sun was burning fiercely when I arrived outside the convent about 1:00 PM. I was just outside the gates when I saw an elderly man with a white beard, a shabby cassock held by a belt, and a straw hat to protect his head from the sun. He was digging with a pickax, filling a small barrel with dirt, and spreading the dirt around a 15 sq. yard area to level the convent's courtyard. I thought that he was either one of the conven't workers to whom they had given an old cassock so as not to soil his clothes, or an old novice from the monastery. Approaching the elder, I greeted him and asked, "Elder, is the Bishop here?"

"Good, go and tell him that a spiritual child of his is here, a deacon, who wants to see him."

"May it be blessed," he responded humbly, and putting down the pickax, he showed me to a new room about fifteen yards away from the convent's entrance. He told me, "Wait here and I will go tell him to come."

Five minutes had not gone by, when - what a surprise, what depth of immeasurable humility! Surprised and shocked, I saw that the man whom I had thought to be a worker, a villager, or a peasant and to whom I had spoken harshly and ordered around, was the Bishop himself! Neither had I even considered that this was the afternoon rest hour, when everyone slept! I should have never told him to do anything, but instead, waited patiently for the time of Vespers. No, I the disciple had shown my extreme pride while my teacher and spiritual father had shown his extreme and complete humility! I was struck speechless and knelt down, tearfully begging him to forgive me for my pride and bad manners. He being guileless, meek and humble of heart, of course, forgave me. We sat down and he began to guide me, as he always has, along the way of the Lord.

"Father," I asked, "how can I be delivered from this God-hated pride?" And with love and humility (the two great virtues which God had bestowed upon him), he responded:

"My dear spiritual child in the Lord, our Holy Fathers have told us, that each sin, whether great and deadly, or small and pardonable, is defeated by the opposite corresponding virtue: that is envy is defeated by love; pride by humility; avarice by poverty; greed and hard-heartedness by charity and compassion; negligence by diligence; gluttony and servitude to the stomach by fasting and restraint; idle talk by silence; criticism and slander by self-reproach and prayer; lewdness, fornication, adultery and other sins of the flesh by remembrance of death, the Last Judgment to come, and the recompense of Hell. In general, every evil is defeate by every virtue. As the Prophet David says, 'Turn away from evil and do good.' If you wish to be delivered also from the sin of pride, the mother and cause of all sin and evil, you will be delivered through humility.

"Because we are not able to do anything on our own (as the Lord says, 'Without Me, ye can do nothing') let us ask the All-Good and man-loving God with compunction and humility, with sighs and tears, to deliver us from demonic pride. Let us sigh like the Publican, cry like the adultress, repent like the Prodigal Son, saying, 'O All-Good compassionate and man-loving Father, we have sinned before You; accept our repentance and make us as one of Your paid servants.' Let us pray and beseech the Lord as the divine Chrysostom did in his daily prayers: 'O Lord, grant us humility, a humble way of thought and obedience; O Lord grant us patience, longsuffering and meekness; O Lord, implant in our hearts the root of good, Your fear; O Lord, grant us to love You with all our soul and heart and to keep Your divine commandments.'

"Likewise, so that we may be delivered from satanic and all-destructive pride, let us look to the example of our Heavenly Teacher, and to the lesson He gave to His disciples, to us, and to all Christians of every generation and age: 'Learn of me, for I am meek and lowly in heart, and ye shall find rest in your souls,' and 'When ye shall have done all those things which are commanded you, say: We are unprifitable servants, we have done that which is our duty to do.'"

Receiving this and other beneficial counsel from my holy spiritual father Nektarios, I left joyous and spiritually gladdened; and at the beginning of September, 1910, I returned through Syros to the island of Paros and the monastery of my repentance. 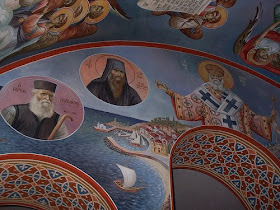 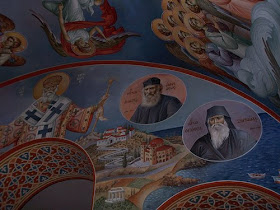 St. Nektarios with his saintly spiritual children, (from left to right) Elder Gervasios Paraskevopoulos, Saint Savvas of Kalymnos, Elder Amphilochios Makris and Elder Philotheos Zervakos. This icon is in the Cathedral dedicated to St. Nektarios in Aegina.
John at 10:43:00 AM
Share
‹
›
Home
View web version