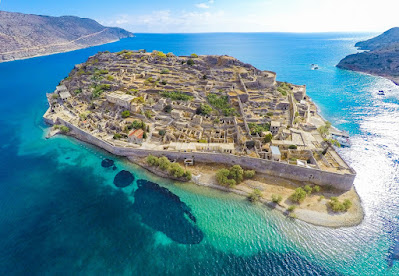 When the decision of the Cretan government in 1903 to transfer the lepers of Crete to the island of Spinalonga became known, the then Bishop Titos of Petras renovated the Church of Saint Panteleimon that was located there and consecrated it, before the lepers even arrived. But when he wondered if he would find a priest, Father Manolis Psarakis, a parish priest in Neapolis, stood up and volunteered to serve the sick, which he did with zeal for 21 whole years. After the death of Papa-Manolis, he was successively and voluntarily succeeded by the very old Father Nestor, Father Nikandros, Father Nikodemos and Father Andronikos who served until 1935, all brothers of the Holy Monastery of Aretiou.

Then the Hieromonk Meletios Bourgouris, a clergyman with great education and true faith, arrived from Mount Athos. He remained in Spinalonga for 13 whole years and did not leave them even during the years of occupation, where hunger caused the death of about 100 lepers, ill-treated together with them, while together with the lepers he designed the bell tower of the Holy Monastery of Saint Andrew in Finokalia (there is a relevant inscription there). In 1948, fulfilling his old vow, he went to the Holy Land until the end of his life. 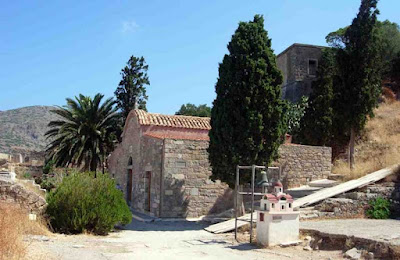 After the departure of Meletios, the hieromonk Chrysanthos Katsoulogiannakis from the Holy Monastery of Toplou in Sitia, who was also the last parish priest of the Island, took over. He was never afraid of contracting the disease. After he transmitted the Immaculate Mysteries he would consume the remaining portions by saying characteristically: "Holy things are not defiled." He stood by the side of the lepers, a real supporter and helper, and reposed in 1972 in the Toplou Monastery. 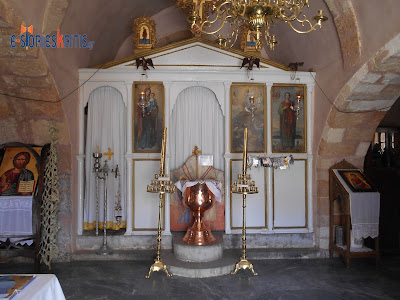 "One Sunday, going to his Liturgy at the Church of Saint Panteleimon, Papa-Manolis Psarakis saw a mark on his vestments and after the end of the Liturgy he told the churchgoers that the fullness of time has come and that it is the last Liturgy he performs and asked to assemble the next morning all the sick in the church. Indeed the next day they assembled and weeping they chanted a Supplicatory Canon, a Prayer of Forgiveness was read and he asked everyone for forgiveness. He blessed them and with sobs and they accompanied him to the wharf. The next Sunday at noon he delivered his spirit to Christ. May his memory be eternal! I am sure of his reward in heaven."
John at 3:41:00 PM
Share
‹
›
Home
View web version