How Fr. Evangelos Halkidis Came to Possess the Hand of Saint Panteleimon 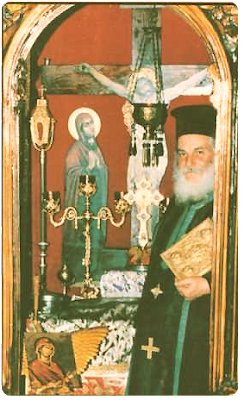 In the small chapel, in Fr. Evangelos' (1923-1987) house, were resting the relics of many saints that were fragrant, and the hand of Saint Panteleimon would release myrrh.

All of them had miraculously come into his possession.

One day, in the summer, with a lot of heat and little sleep, the father returned from a ministry duty to his house, in Thessaloniki where he lived at the time, and being tired he lay down on the couch with the window half open above him.

While he was in a state of semi-vigilance, suddenly the window shutter began to bang violently, and a handsome young man appeared before his eyes, saying, "I have come to stay here."

The father, not knowing whether he was awake or asleep, replied: "Unfortunately I cannot keep you here. There are seven of us in this house and we have only two rooms. If you want, sit down and rest, and then you will leave."

At that moment the intercom rang. A priest came up accompanied by a nun carrying a reliquary.

"We have come to leave you the hand of Saint Panteleimon, Father," he said.

Father Evangelos then understood who the young man was who wanted to stay close to him.