Some Contemporary Miracles of Saint Marina 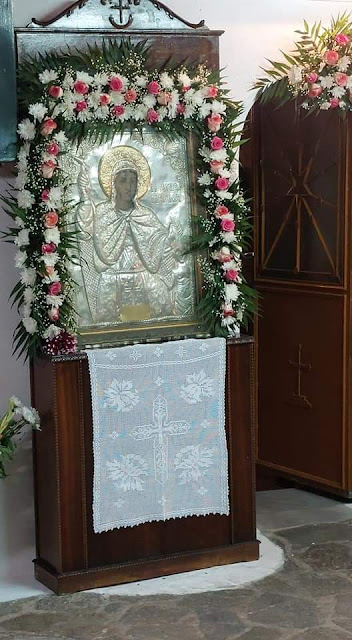 By Fr. Elias Makos
The martyric life of Saint Marina is well known. After being physically tortured by being beaten with rods and setting her wounds on fire, she endured, and then they took her head.

As a result of this courageous attitude of hers and her bright way of life, she became a miraculous Saint.

And this, because the Christian faith is not a theoretical ideology, but mainly a way of life.

The believer does not differ from the unbeliever in his metaphysical views, but mainly in the way he lives.

Many miracles of Saint Marina are mentioned even in our days.

Indicatively, we list some, which, like with all the Saints, reveal the signs of God's presence among us.

A woman, E.K., had been bleeding for seven consecutive years. The issue was not treated medically and with each passing day it got worse.

She decided to take refuge in Saint Marina of Andros, where she fasted, participated in a vigil, received communion, drank holy myrrh.

After a few days she returned home and found that the bleeding, which had plagued her for so many years, had stopped.

A young man was seriously injured in a car accident. His life was hanging by a thread. He was in the intensive care unit.

A supplicatory canon to Saint Marina was chanted for his health and immediately everything changed. At the hour of supplication he came back, uttering a cry.

A few days later, he recounted hearing Saint Marina assure him that he would be fine.

S.M. was diagnosed with a brain aneurysm. Three solutions were proposed to her: Transfer abroad. Craniotomy. Embolization.

He did an embolization, putting Saint Marina's myrrh on her head shortly before the operation began, and everything went well.

The doctor told her mother: "It was a miracle that your daughter lived."

He was from Andros, a captain by profession, but he had been unemployed for years and could not support his family.

Desperate one morning, he shouted in the yard of his house, looking towards the direction where the Monastery of Saint Marina was located: "Find me a job, my Saint!"

The very next day he was notified to board the ship "Santa Marina".

How tragic: A three-year-old boy was paralyzed. His parents took him with a broken heart to Saint Marina in Voni of Heraklion.

They left him on a little mattress next to the icon, in front of the candles. And suddenly the child started to move. Everyone who saw the incident was shocked.

Another child, a girl, had a problem with her heart. She was slowly being led to death. His parents were Roma. They started on foot from Heraklion to the Monastery of Saint Marina. Her mother arrived at the Monastery on her knees.

Their heartbreaking prayerful words to Saint Marina broke hearts. But they were heard and the little girl became well.

Little A. was preparing for a serious and at the same time very delicate operation. An unknown woman appeared as a doctor, just before the surgery began, and asked to watch the operation, because she is the child's personal doctor.

The doctor, who was going to operate, with his team, refused her, because it was not allowed, but she was so persistent, that finally he allowed her.

There, she was not limited to her presence alone, but actively participated. When the operation was successfully finished she disappeared.

The little boy's parents were asked about the female doctor, but they were ignorant. Everyone crossed themselves when they saw that she had signed in as "Marina from Andros".

Christ, through the miracles of His saints, abolishes the darkness of ignorance and sin and its effects, which are physical and spiritual death.

The Lord's miracles are done out of a deep feeling of love and support for those suffering and asking for God's mercy.

His only requirement is trust, which he asks from people.

The constant presence of the Lord can also be seen in the lives of the saints of all times.

Our faith, however, must not depend on miraculous events to be genuine and sincere. The believer experiences in the mysteries of the Church a continuous miracle.