Homily on the Sunday of the Holy Fathers of the Fourth Ecumenical Synod - The Theology of Fatherhood (Metr. Hierotheos of Nafpaktos) 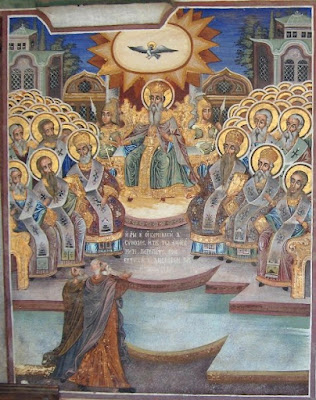 The Theology of Fatherhood

The Fathers of the Church interpret that the "light of the world" are those people who, having surpassed all the senses of the world, reached with an illuminated nous the supersenses, were united with Christ and then "utter" from their pure hearts good words in the midst of the Church. They became spiritual, having previously cleansed the flesh with fasting and vigilance, with tears they refined the fatness of the heart, with laborious toils they put to death their members, with prayer and study they filled the nous with light, with the renunciation of material goods they separated the souls from the effort of the body. Such were all the Saints and especially the Holy Fathers.

It must be emphasized that the Orthodox Church is patristic, not because it once had its God-bearing Fathers, who preserved the true faith from the danger of heresies, but because there are always Fathers. The Orthodox Church was, is and will be Patristic, because it is the real Body of Christ and within it is the Holy Spirit. In order to somehow understand this, we must examine what we mean by the term "Fathers".

In the Holy Bible, the name "Father" is used as a hypostatic idiom (mode of existence) of the Father to show His relationship with the other Persons of the Holy Trinity, insofar as the Father gave birth to the Son and Word of God before all ages and from the Father proceeds the All-Holy Spirit. The Father, through the Son, in the Holy Spirit created the world and man, but also recreated man. The Son and Word of God became human to give life to man. Man was dead and could not be revived by himself. Therefore, Christ in relation to His Father is called Son, in relation to people he is called Father, because He imparts life to people.

Also, all those who were reborn in Christ are called Fathers, because they received the Holy Spirit, who formed Christ in them, became dwelling places of the Holy Triune God and then passed on their experiences to their spiritual children, with the result that they were reborn. Such were the holy Apostles who became the "light of the world". The Apostle Paul wrote to the Corinthians: "For though you might have ten thousand instructors in Christ, yet you do not have many fathers; for in Christ Jesus I have begotten you through the gospel" (1 Cor. 4:15). He is aware of his fatherhood, that is why he says about his disciple Timothy: "He is my beloved and faithful child in the Lord" (1 Cor. 4:17).

And the holy Hierarchs, successors of the holy Apostles, are "the light of the world", they are called Fathers, because they were united with the Son of God by nature, they are also sons of the Heavenly Father by Grace. Thus, they regenerated their flock and acquired spiritual children. Let us not forget that the teaching of the Holy Fathers is not a dry scientific knowledge, but the true knowledge of God. Their life and their teaching are indeed the "light of the world", because they were united with the "Light of the world", Christ.

Also, every reborn person is a Father to those who approach them to receive their gentle teaching, which is the fruit of an Orthodox life. Of course, it is understood that this takes place within the sacramental life of the Orthodox Church.

However, it must be noted that spiritual fatherhood is closely connected with sonship. Christ is the Son of God, who obeyed His Father until death and is the Father of Christians. He, therefore, who is united with Christ and is by Grace the son of God, is at the same time also by Grace the father of others. This means that sonship is associated with discipleship and obedience, while fatherhood is associated with sacrifice and pain.

However, in order to be a real spiritual father, one must be a son of God at the same time. Only as a child of God can he acquire the Tradition and can then pass it on, not in mechanical and external ways, but mysteriously and become a father to other people. Everything, as is natural, begins with obedience to God and the contemporary holy Fathers. The disobedient ceases to be a disciple and a son. The obedient is regenerated and can regenerate others.

Of course, it is the teaching of the Holy Fathers that spiritual fatherhood within the Church does not mean the abolition of brotherhood in Christ. Christ, while He is the Father of men, nevertheless "is not ashamed to call them brothers" (Heb. 2:2). Thus, the spiritual father for his disciple is a father, but at the same time a brother in Christ. They are members of the Body of Christ.

Also, spiritual fatherhood is closely connected with motherhood. And here we have the example of Christ, who said: "How I have desired to gather your children, as a hen gathers its own chicks under its wings..." (Matt. 23:37). As we also have the example of the Apostle Paul, who writes: "My children, I am giving thanks for the formation of Christ in you" (Gal. 4:19). This means that the spiritual father is more a mother than a father. He has affection and love in Christ, and in this climate of love in Christ, spiritual children grow and are perfected.

Therefore, the Saints are spiritual fathers, i.e. "the light of the world", because they regenerate us, they enliven us, they direct us with patience and affection towards deification, they illuminate us constantly since they became the abodes of the Three-sunned Deity. Let us have their blessing and let us place ourselves under their spiritual guidance in order to complete ourselves spiritually.