How Saint Anna Saved a Greek Family from a Nazi Assault

During the years of the German occupation of Greece, the following incident happened.

Father Hesychios Agiannanites (1909-1982) was passing through a village with the relic of the foot of Saint Anna, the Grandmother of the Lord. In a certain house, when they learned that the Holy Relic of Saint Anna had arrived, they ran to welcome it with longing.

With many tears and words of thanks, they venerated and kissed the Saint.

"What has happened to you, my Christians, and you venerate the Saint with such eagerness and devotion?" asked Father Hesychios. 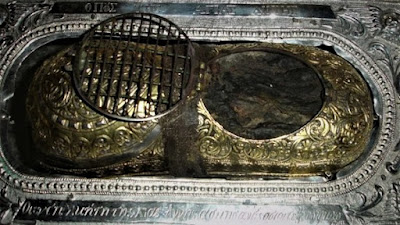 The father of the family replied:

"Yes, Elder, Saint Anna saved our home from death and preserved our honor and dignity. Not long ago, Germans came to the village, bringing with them some twenty Mongol savages with the intention of terrorizing and dishonoring the women of the village.

With the help of a traitor they committed many indignities and misdeeds. Six of them came to our house one night. They took me outside.

They prepared to attack my eldest daughter but she fought them off. He grabbed an ax and almost chopped off the hand of one of them. They became afraid.

They left and came back with sixteen of them in total, all rigged up. We barricaded the house from all sides and the siege began.

We fell to the floor to escape the bullets, begging various saints for help.

At one point one of my daughters cried out: "Saint Anna, help us, we are dying."

"Do not be afraid, I am with you," the voice of the Saint was heard saying.

And then immediately the house shone with an exquisite, heavenly light, while it was night.

The besiegers soon fled in terror.

Who knows in what way the Saint drove them away.