Homily on Galatians 3:27 - "As Many of You as Were Baptized Into Christ Have Put on Christ" (Metr. Hierotheos of Nafpaktos) 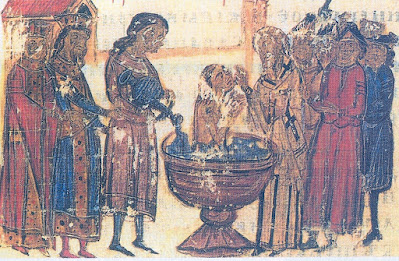 Homily on Galatians 3:27 - "As Many of You as Were Baptized Into Christ Have Put on Christ"

By Metropolitan Hierotheos of Nafpaktos and Agiou Vlasiou
In the sermon of each Sunday of the two summer months this year, we will interpret some phrases of the apostolic readings that are read in the Divine Liturgy. These are readings from the Apostle Paul's Letters to the Christians of the various Churches he had founded, and they aimed at solving problems and guiding them to a life in Christ.

Today we will interpret the passage from his Epistle to the Galatians, which refers to the Baptism of Christians and declares its great value: "As many of you as were baptized into Christ have put on Christ". That is, those who were baptized in the name of Christ have clothed themselves with Christ. This passage is chanted every time the Mystery of Baptism takes place and it is also chanted on the great Despotic Feasts, Christmas and Easter, because then the group baptisms of the catechumens and the illuminated took place. It is a very important passage.

Furthermore, when we are united with Christ, we also know the Father and the Holy Spirit. Christ is never separated from the other Persons of the Holy Trinity. The Church is the Body of Christ, in which we partake of the energy of the Triune God, since the energy of the Persons of the Holy Trinity is common among them. Furthermore, the triple immersion of the baptized into the font signifies the death, burial and resurrection of the Christian together with Christ (Rom. 5:3-6). That is, the old man is crucified and the new man in Christ is resurrected.

In the passage, however, what we are interpreting is the phrase "have put on Christ", that is, whoever is baptized in Christ puts on Christ. According to the Fathers of the Church, the Holy Spirit is called the garment of the faithful, which Christians wear not like clothes, but like iron wears fire. If we place a piece of iron in the fire, then the fire does not surround the iron from the outside, but penetrates into its substance and thus the iron "entirely" clothes the fire. This also happens with the Christian who is baptized in the holy font, since then he is filled with the uncreated fire of the Holy Spirit, he is completely transformed. When the Grace of God illuminates man, then it enters his entire existence, it illuminates his entire inner world, the nous, the heart, the intellectual faculty, desiring faculty and incensive faculty and in general his entire existence.

Because the baptized man puts on Christ, that is why he is called a Christian. He does not receive a name externally, but a name that indicates his renewed existence. Remember the Protomartyr Stephen, who when he saw the glory of God before the Sanhedrin, then his face also looked like the face of an angel.

The day we were baptized is very important for our lives, because we were filled with the fire of the Holy Spirit, we clothed ourselves with Christ, we were baptized in the name of the Triune God, we died and rose again with Christ. Being a Christian is of great importance, it is a divine gift, an extraordinary blessing from God. I don't know to what extent we think about this event and whether it moves us particularly.

Of course, when we do not live according to the life that holy baptism presupposes, then it is necessary to renew the baptism with the mystery of repentance and sacred Confession.

Let us learn and chant this beautiful hymn: "As many of you as were baptized into Christ have put on Christ, Hallelujah".