Homily Two for the Fourth Sunday of Matthew (St. Luke of Simferopol) 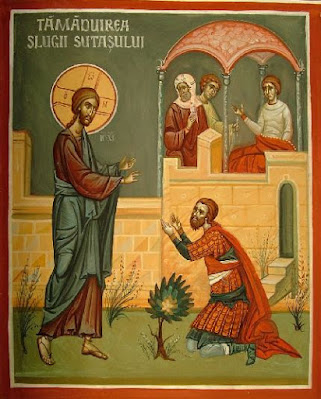 (Delivered in 1958)
In Capernaum, where our Lord Jesus Christ was, a Roman centurion timidly approached Him and humbly asked to heal his seriously ill servant with one verbal command, for he considered himself unworthy for the Great Wonderworker to come to his house.

The Lord Jesus Christ was amazed by the deep faith and humility of a pagan, a Roman officer, and said to those who followed Him: “Truly I tell you, even in Israel I did not find such faith. I tell you that many will come from the east and the west and sit down with Abraham, Isaac and Jacob in the kingdom of heaven; but the sons of the kingdom will be cast out into outer darkness: there will be weeping and gnashing of teeth. And Jesus said to the centurion: Go, and, as you believed, may it be unto you. And his servant recovered in that hour” (Matt. 8:10-13).

We know from the history of the Church how these words of the Lord Jesus Christ, difficult for the sons of the kingdom, came true. We know how many pagans of Greece, Italy, Spain, Gaul and Britain entered the Church of Christ from the West. We know that Armenians and Georgians have turned their hearts to the Lord Jesus from the East, and even the rays of the light of Christ have reached faraway India and China.

Let us also not forget that our great northern country, Russia, has long since become part of the Church of Christ. And to this day, the light of Christ continues to spread far to the south, into the wilds of Africa, and black Negroes become Christians.

With pain in our hearts, we think of the God-chosen people of Israel, destined to become sons of the Kingdom, but who rejected their Messiah and crucified Him.

How can we not grieve for them if, according to the word of Christ, pitch darkness and gnashing of teeth await them!

It is deeply important for us to delve into the prophetic words of Christ about those peoples and individuals who have entered and will enter His Church, and about those who will remain outside of it.

To do this, first of all, we need to be affirmed in the consciousness that the Lord Jesus Christ descended from heaven and took on human flesh for the salvation of not only the God-chosen people of Israel, but all the people of the earthly world.

Let us see what constituted the basis of the religions of the ancient world and to this day forms the basis of non-Christian religions. The religion of the dark pagans was based only on the fear of unknown, superhuman forces that control the terrible natural phenomena and difficult events in human life.

The religion of the cultured ancient peoples of Greece and Rome rose far above the fear of the ancient pagans. It arose on the need of the mind to know or invent unknown higher powers that govern the material world and the spiritual world. This is how Greek and Roman mythology arose, this is how the hosts of Greek and Roman gods were born, whom the cultural pagans imagined as leaders and masters of higher material and spiritual forces.

It was only a religion of the mind, but not of the highest aspirations of the heart and spirit.

The people of Israel received from above the God-revealed religion about the One True God. But this highest religion was the property of only the best people of the people of Israel, and only they lived according to its laws, and the bulk of the Hebrews very often and easily left their faith in the One Jehovah, adopted the pagan religions of the peoples neighboring them and, together with them, worshiped the Baals and Astartes and other false gods.

The Old Testament historical books of the Bible, especially the books of Kings and Chronicles, are full of stories about these deviations from God-revealed religion. It is this portion of the Hebrews, so close to paganism, and their descendants, who are guilty of rejecting their Messiah and Savior and crucified Him on the cross. Of course, our Lord Jesus Christ had them in mind when he said that the sons of the kingdom would be cast out into outer darkness, where there is weeping and gnashing of teeth.

What shall we say about the Mohammedan religion, which has a lot of followers? Muslims worship the "one true god" - Allah - and serve as the guardians of morality. But morality, as Muslims understand it, is much lower than the whole, entirely soul captivating love for God and similar love for neighbors. And this highest form of love is the basic law of our Christian religion.

And in all nations, throughout the world, among people of different religions, there are many individual people with pure, pious and loving hearts. Such was the centurion who asked the Lord Jesus Christ in absentia, in one word, to heal his sick servant.

Such was another Roman centurion - Longinus, who led the crucifixion of the Lord Jesus, but believed in Him as the Son of God, and became a martyr for preaching about Him.

Such was also the third Roman centurion, Cornelius, about whom we read in the 10th chapter of the Acts of the Holy Apostles, how God himself miraculously commanded the Apostle Peter to seal his faith and piety with the holy mystery of baptism.

Remember forever, my dear ones, that our Lord Jesus Christ requires from us not only the fear of God and a reasonable knowledge of God, but first of all and most of all, a wholehearted love that is not shared with anyone else for Him, His beginningless Father and the Most Holy Spirit.

Remember that the true Christian religion is the religion of the pure in heart, striving for the highest and perfect truth; the religion of hearts wholly dedicated to God and yearning for eternal communion with Him, and not just a religion of fear, speculation and meditation on God.

And then you will be worthy of the highest title of the sons of the Kingdom! Amen.