Homily One for the Fourth Sunday of Matthew (St. Luke of Simferopol) 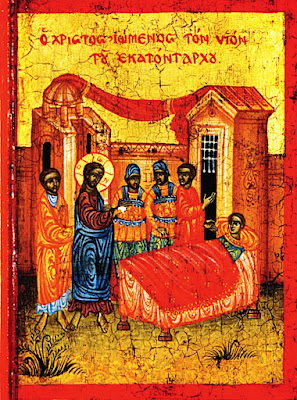 They also heard the deeply important words of the Lord Jesus spoken on this occasion: “Truly, I tell you, even in Israel I did not find such faith. I tell you that many will come from the east and the west and sit down with Abraham, Isaac and Jacob in the kingdom of heaven; but the sons of the kingdom will be cast out into outer darkness: there will be weeping and gnashing of teeth” (Matthew 8:10-12).

These prophetic words of our Lord Jesus Christ have been fulfilled.

In the Far East, in Japan, the light of Christ has long shone, and many martyrs, in severe suffering, gave their lives for faith in the Lord Jesus Christ.

In the far West, in the southern states of North America, and in Africa in the far south, there are more than two million Negro Christians. And there is no people for whom the light of Christ has not shone. Let us remember that our Lord Jesus Christ compared the Kingdom of Heaven with a net thrown into the sea and capturing fish of all kinds, which, when full, they dragged ashore and sat down, collected the good in vessels, and threw the bad out.

The net of Christ was thrown wide over all mankind, but very much of what they seized had to be thrown away as worthless, and left a small but precious flock of Christ.

It consists of those about whom we read in the first chapter of the Gospel of John the Theologian: “He came to his own, and His own did not receive Him. And to those who received Him, to those who believed in His name, He gave the power to become children of God” (John 1:11-12).

Why is there so little value left in Christ's net? Because the whole human race is divided into two very unequal parts: the vast majority are those who are called in the Holy Scriptures "the people of the earth." These are those for whom the interests of well-being in earthly life are most important and even the only important. And they are indifferent to the blessings of eternal life, in which they believe little or not at all.

That spiritual disposition, which our Lord Jesus Christ requires in His great commandments of the Beatitudes, is not only completely alien to them, but also prevents them from achieving their own goals of earthly well-being.

At the poor in spirit, the humble and meek, they laugh and despise them. They exalt pride and strength and courage in the fight. They do not think about purity of heart. Of course, they do not want to be persecuted for Christ's sake, but the believers are vilified.

For them, of course, "Christianity failed," according to the caustic and catchphrase word of one of the frivolous French encyclopedic philosophers, who ridiculed the entire Gospel of Christ.

And for the small flock of Christ, of course, it was completely successful, because only for the sake of this flock did our Lord Jesus Christ shed His priceless Divine Blood on the terrible Cross of Golgotha.

To Him, our Savior from eternal death, let us give our whole hearts - all our love and all our thoughts, inseparably from His Eternal Father and His All-Holy and Good and Life-giving Spirit forever and ever. Amen.